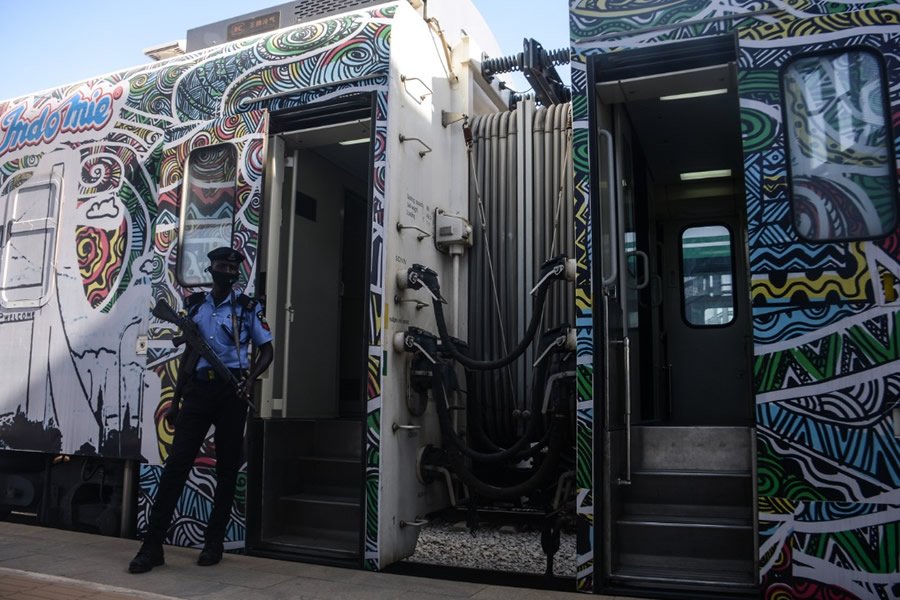 On Sunday, a train accident was averted at the rail tracks located at Chikakore Kubwa, The PUNCH reports.

A Sienna vehicle conveying a family of five broke down on the train tracks, however, good Samaritans at the scene helped the family toll the vehicle away from the tracks to enable the train to pass.

The Chairman, Chikakore Community Zone-E, Ismail Yusuf, in a message sent to our correspondent in Abuja said the community almost witnessed another train accident this morning (Sunday).

According to him, a vehicle broke down on the rail tracks while the train was approaching, adding that fortunately, the train was able to stop before getting to the point where the vehicle was.

The message read, “We almost had another unfortunate incident this morning on the train track as another vehicle broke down right on the track while the train was approaching. Fortunately, the train was able to stop.

“However, the train management are trying to block our entrance road for violation of regulatory procedures. I am presently unavailable in the community, therefore, I have appealed to everyone around to move en masse to the scene now but we will need the assistance of the media to come to our aid not so that they don’t cut us off without any alternative. Please help us ma.”

Our correspondent visited the scene on Sunday, however, on getting there, the crowd had dispersed and the train moved.

An eyewitness, Simon Abu, told our correspondent that while the train was approaching the track close to the entrance of the community, the vehicle broke down but fortunately the train was able to stop.

“When the train was coming, the man was rushing quickly to cross the track before the train passed and it was like something from the front tyre spoilt and the car broke down.

“But luckily, the train stopped, the vehicle however stopped on the track and people rushed out even from the church close by and pushed the car out so that the train could pass. So, they allowed us to toll the car out before the train passed. More than 100 people helped to toll the car, before you know, all the soldiers and security personnel onboard cane down to know what was happening,” he said.

Meanwhile, the Secretary of the Community, Moshood Lawal, who was present at the scene told our correspondent that when the Nigerian Railway Corporation and the security personnel arrived the scene of the incident, they said they were given directives to impound the vehicle because it had obstructed the train movement.Related News

He also stated that the corporation said they were going to dig a hole across the road to restrict vehicular movement along that route, which he said was not palatable with the community because it would restrict the movement of a large number of residents in the community, adding that it was not the solution to the reoccurring problem.

Speaking further, he said if the NRC was not willing to provide safety measures on that route, the community had decided to put a barricade to avert further loss of lives, adding that it was the NRC that dug a hole in between the train tracks which makes it difficult for vehicles to pass with ease.

He added, ”So, we discussed with them but discovered that there was actually a plan to build a bridge there before now but wasn’t done.”

“However, the community has decided to put a barricade if the NRC is not willing to do it in order to avert further loss of lives because it was the same railway that came to dig between the tracks which makes the hole there to be deep for any vehicle that passes there must slow down or get stuck. They said they did that to make the train move fast. We hope the NRC will also put a barricade and also post their staff there.

“Whether we like it or not, people will want to cross and the train will come and meet them there so the community is taking up some measure to avert any further damage and we hope that the NRC will also do the same thing and post their staff there or build a barricade.

“But the part that was not very palatable for the community was rather than look at it as a problem and look for solutions they are talking about digging a hole across the road so that cars will not be able to pass which would be blocking a large number of residents off their way,“ he added.

When contacted, the Director, Rail Transport Services, Federal Ministry of Transportation, Jimoh Yusuf, said there was an underpass about 200 meters from the location of the illegal level crossing where the unfortunate accident occurred last week, adding that it was the proper place for vehicles to cross from one side of the railway to the other.

He also said the NRC had in the past undertaken sensitisation to the people around such illegal crossing to advise them to utilise the designated crossing underpass to avoid accidents.

“The situation is similar to what we have on township highways where some people prefer to cross the hazardous road instead of using the safe overhead pedestrian bridges,” he said.

He also disclosed that the train did not halt to avert ramming into the spoilt vehicle but stopped on its own to check a fault on the train.

“Regarding what you referred to as “another train accident almost happened today”, my enquiry from the NRC indicated that the locomotive stopped on its own for fault checking and not because it was trying to avoid a collision with any spoilt car,” he added.

Speaking on the plans by the Federal Government to close the illegal route to avert further accident, he was quoted saying, “Honestly, I don’t have any information about these things but I believe the NRC management will eventually have to take measures to curtail illegal crossings.”