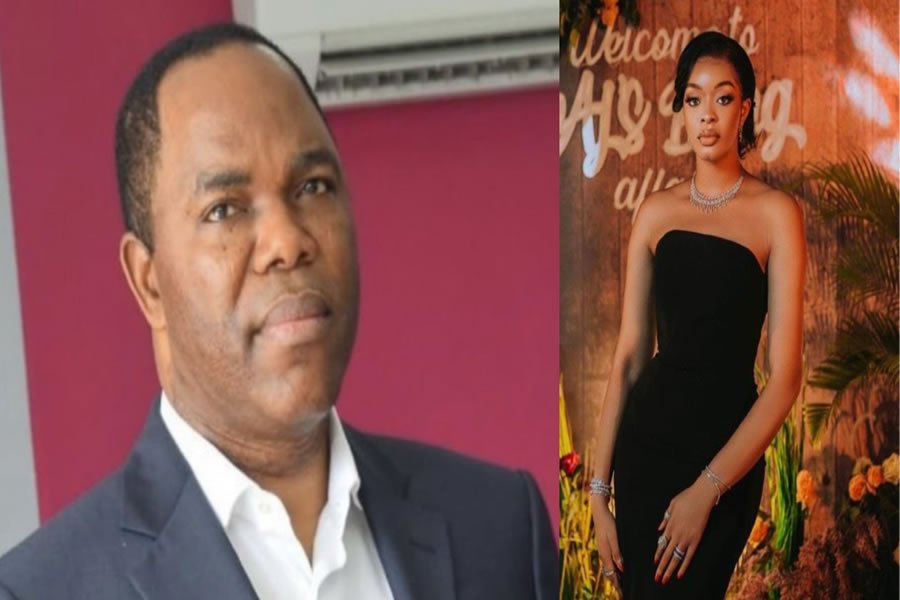 According to the sources, Adaobi, who is 30 years old, was a classmate of the businessman’s daughter.

Nigerian businessman and former chairman of defunct Skye Bank, Tunde Ayeni is in a paternity tussle with a female lawyer in Abuja identified as Adaobi Alagwu, sources familiar with the issue have informed SaharaReporters.

According to the sources, Adaobi, who is 30 years old, was a classmate of the businessman’s daughter.

Ayeni had last week publicly denied being the father of the lawyer’s baby.

“To continue to spread this unfounded tale is not only unfair to our friend, but also an embarrassment to the lady who knows the father of her baby. Tunde has got nothing to do with this.

“In 2019, businessman Tunde Ayeni met and dated Ada briefly, and being a perfect gentleman he had presumed her to be a decent and respectable lady, one who can be considered for future prospects should the possibility arise. But alas! A Leopard cannot hide its spot for too long. Realising that he could not cope with her numerous escapades and being a highly responsible individual, He called off the relationship at once within just a matter of months.

“Having ended the relationship with Ada, Mr. Tunde Ayeni moved on with his life since 2019 and had put all the unpleasant experience in the past. It came as a rude shock and is highly traumatising, the recent rumor gaining grounds within the FCT of a paternity row between Ada and Tunde,” a statement by his media team had read.

However, sources familiar with the duo’s relationship confirmed Ayeni as the father of the baby.

“Isn’t it funny that Tunde Ayeni is in a pregnancy dispute with a 30 years old girl, younger than his first and only daughter,” a relative of Adaobi told SaharaReporters.

He described Ayeni’s initial statement as a panic move and an attempt to shut Adaobi up because “he suddenly realised his folly and the lifetime pain this has brought on his long suffering wife and children. Not only is Adaobi Alagwu as young as his daughter, she was in fact in the same class as his daughter.

“He dated and flaunted her openly and with no regard for his family and friends then. He gifted his building, right next to a supposedly serious business entity of his (address withheld) to her out of fear he might lose her.

“He gifted her the house she lives in Lakeview in Abuja, and purchased a choice property for her mother to live in. This act of his drove his daughter to shame. Whilst his daughter was struggling, he set up Adaobi’s chambers. Her chamber is at 36, Birao Street, Wuse 2, back of AP Plaza, off Adetokunbo Ademola Street in Abuja.

“He also gifted her a multi-million Naira Range Rover from his fleet and was constantly at her office even in the full glare of his hardworking staff next block.

“Currently, Ayeni just pretends he is a rich man in billions but all he really does is to struggle for positions with real politicians as he’s currently doing with the Atiku campaign. He’s battling tooth and nail to secure his place with Atiku so as to be the one all funds would be kept with.

“In the last six years where he has spent most of his time chasing Adaobi, his business has suffered. Ayeni has been desperately appearing in all Atiku’s pictures in order to compromise people and make them believe he is very important in Atiku’s campaign.”

Another source described Adaobi as a temperamental lady.

According to her, Ayeni broke the “unspoken gentleman code” with his long time bosom friend, Greg Uanseru.

“She’s not different from Ayeni, she was warned against Ayeni. She’s so mean; she shouts, abuses all the staff at will and controls their actions. It was Ayeni’s bosom friend, Greg Uanseru that we know with aunty Ada before. Greg it was, who was playing and fiddling with her before Ayeni snatched her from him by outspending Greg and all others.

According to the source, the lawyer had also vowed to drag the businessman through the mud until he took full responsibility for the baby girl.

“She is ready to drag him through the mud if he continues to deny the paternity of her daughter. She said he was the one who encouraged her to get pregnant and many witnesses can attest to it. According to her, early last year, she was a constant face at his Solween house as she lived with him in his Rhine street address.

“Ada also told us that many times in the past, she had actually walked out of the relationship with Ayeni only for him to run to her mother and other family members on bended knees to beg.”

Recently, the Economic and Financial Crimes Commission withdrew the N25.4billion corruption case it filed against Ayeni; and the Managing Director of defunct Skye Bank, Timothy Oguntayo, after entering into a secret settlement with the businessmen that might have involved the forfeiture of N15billion in cash and assets.

The EFCC under the leadership of Ibrahim Magu, had on March 7, 2019 arraigned him, Oguntayo and two other companies before Justice Ijeoma Ojukwu of a Federal High Court, Abuja on 10 charges bordering on money laundering to the tune of N25.4bn.

One of the counts had read, “That you, Tunde Ayeni, whilst being the Chairman, Board of Directors of the defunct Skye Bank Plc, between the 1st of January, 2014 and 31st December, 2014 at Abuja within the jurisdiction of this honourable court did commit an offence, to wit: converting the aggregate sum of N17,415,080,000  taken in cash from defunct Skye Bank Plc Suspense Account and delivered to you by the staff of the defunct Skye Bank Plc, which money you reasonably ought to have known forms part of the proceeds of an unlawful act, to wit: fraud and thereby committed an offence contrary to and punishable under Section 15(2)(b) and (3) of the Money Laundering (Prohibition) Act, 2011 (as amended).”

However, the final amount of money Ayeni and his co-defendant reportedly returned was never made public, unlike other cases involving bank executives.

19-yr-old boy surprises his girlfriend with a benz, iWatch and iPhone X Max for her 16th birthday

Interesting places to visit and things to do in Abuja

Atiku reports Buhari to US,UK, others