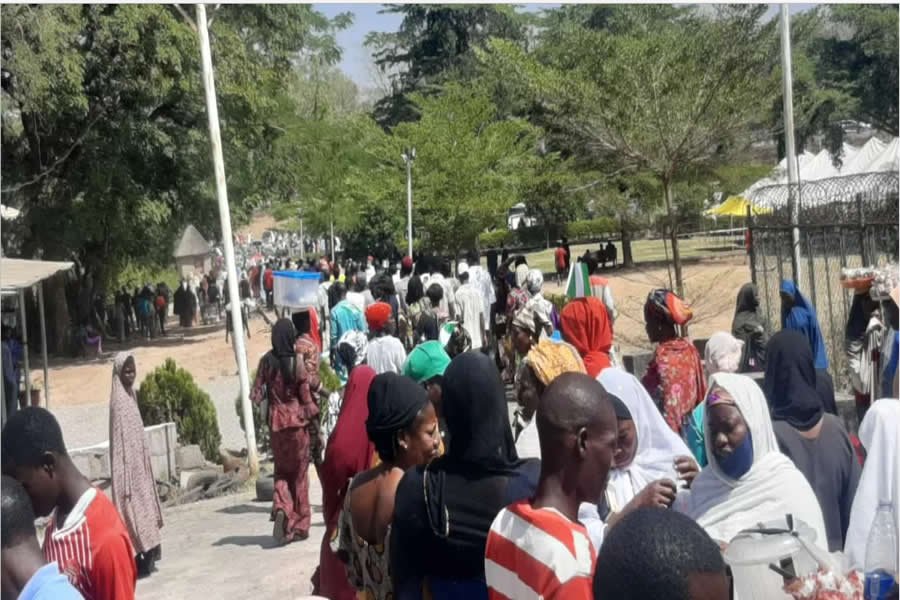 Massive protests have hit the streets of Abuja, on Monday, following the discovery of a suit secretly filed by the State Security Service (SSS) wherein it accused the Central Bank of Nigeria (CBN), Godwin Emefiele, of terrorism financing as well as other crimes it described as economic crimes of national security dimension.

The protesters comprising Buhari Legacy Defenders, Arewa Youth Consultative Movement Ohanaeze Ndi Igbo Youth Movement, African Centre for Justice and Human Rights, Ethnic youth Leaders Political Parties Chairmen Forum, Lawyers in Defence of Economic rights and Justice, marched to the Office of the Attorney General of the Federation (AGF) and Minister of Justice where they submitted a petition against the action of the SSS and called for the sack of its DG, Mr. Yusuf Magaji Bichi.

They also submitted similar letter to the office of the President, Secretary to the Government of the Federation, Inspector General of Police, among others.

The groups, which rose from a press conference before they embarked on the march alleged that the SSS embarked on the alleged plot to remove the CBN Governor for political and pecuniary reasons saying the DG SSS and his allies in the plot had already promised someone else the office on the agreement that the cash withdrawal limit policy would be immediately suspended.

Addressing the conference on Monday, the Convener of the Coalition, Tochukwu Ohazuruike, said that the Secret Police filed a Motion in Court accusing the CBN Governor of terrorism financing and other crimes it described as economic crimes of national security dimension.

The protesters further claimed that this plot of labeling Emefiele a terrorist was to undermine President Muhammadu Buhari, usurp his powers to hire and fire and remove Emefiele from office on the strength that they would get an order to detain him for at least 60 days to impose another person as the Central Bank Governor.

The DSS was said to have approached a Federal High Court Abuja in the secret suit under S66 of the Terrorism Prevention and Prohibition Act, 2022 to demand that the Court order for Emefiele’s detention for 60 days in the first instance.