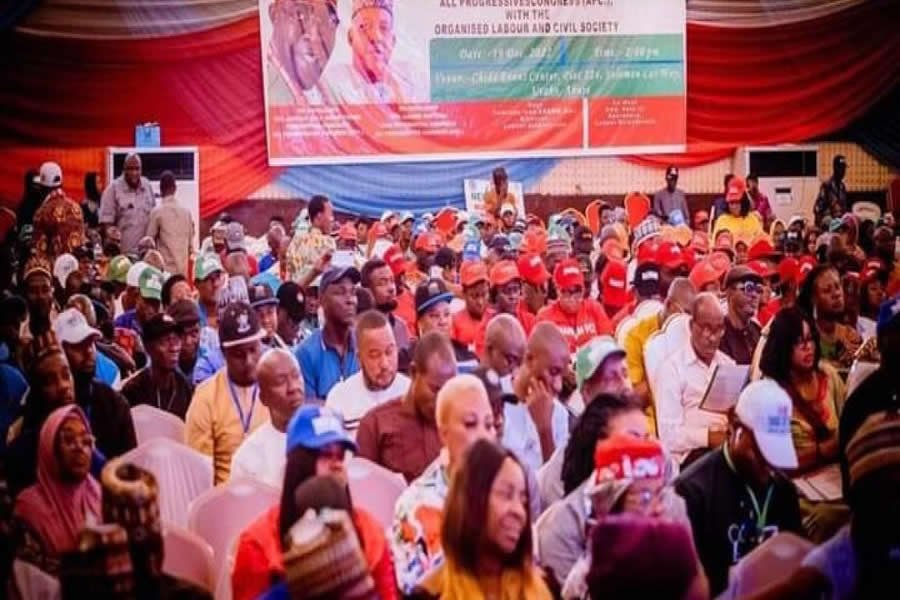 Tinubu disclosed this while addressing workers at the Nigerian Labour Congress (NLC) headquarters in Abuja.

The presidential candidate of the All Progressives Congress (APC) Bola Tinubu, on Monday, says his government would be fair and just to the Nigerian workers if elected into power.

Tinubu disclosed this while addressing workers at the Nigerian Labour Congress (NLC) headquarters in Abuja.

A top official of the NLC told SaharaReporters that Tinubu’s invitation was part of the plans to withdraw the earlier support given to Peter Obi of the Labour Party.

“NLC appears to have broken ranks with Peter Obi of LP, and Tinubu was invited today to address workers at our headquarters,” the source said.

NLC had in June openly declared its support for Obi in the 2023 elections.

According to Ayuba Wabba, the workers union president, Obi is one among the finest Nigerians and the first presidential candidate of the LP to be recognised by the labour centre.

Wabba said the NLC was solidly behind the LP and would fully mobilise to ensure the victory of the party at the 2023 polls.

He said the workers’ unions had realised that strikes and protests alone could not change the narratives in Nigeria, especially as regards workers’ welfare.

Ayuba added that labour must venture fully into politics “and work hard to support candidates whose mantra will make life better for their members and Nigerians at large”.

Meanwhile, in September the African Action Congress (AAC) party had advised the NLC to withdraw their support for Obi.

The AAC had said, “It is more than clear to all now where Mr Peter Obi and the new Labour Party (LP) stands on the removal of fuel subsidies and the privatisation of the commanding heights of the economy.”

“Live on CNN on Saturday, Mr Peter Obi stated clearly that all subsidies should be removed and the private sector should start refining fuel.

“This is a contradiction to the NLC charter of demands and the congress position since the January uprising against fuel subsidy removal in the year 2012. NLC and TUC must note that millions of Nigerians rose up against the Jonathan regime over fuel subsidy removal, with the fear of the hike in petrol and cost of living.

“As of today, the subsidy removal protests have been justified. With the Buhari government’s off-and-on removal of subsidies as well as payment of fake subsidies, petrol price has risen ridiculously to N250 today.

“Gasoline is N800, while Kerosene and diesel sell for the same N800. Airlines are beginning to pack their loads as business is being stiffened as Aviation Fuel now cost about N1000 per litre.

See also  Your candidate will be defeated in 2019 : Lai Mohammed to Obasanjo

“We call on President Ayuba Wabba and Festus Osifo to withdraw their support for Peter Obi as he has only hijacked the Labour Party from it’s moving towards pro-workerist ideas.

“We also call on the NEC of NLC and TUC to rise and take a clear stand against this usurper of the sweat and blood of our heroes and matyrs as the labour movement.

“How can Labour centres be supporting an enemy of workers who oversaw 13 months of Doctors Strike, 2 years of workers strike and refused to pay 11 months pensions as Anambra governor?

“The same Peter Obi has commercialized the Labour Party to the extent that no incorruptible comrade can contest in the party as tickets are sold off in tens and hundreds of millions.”