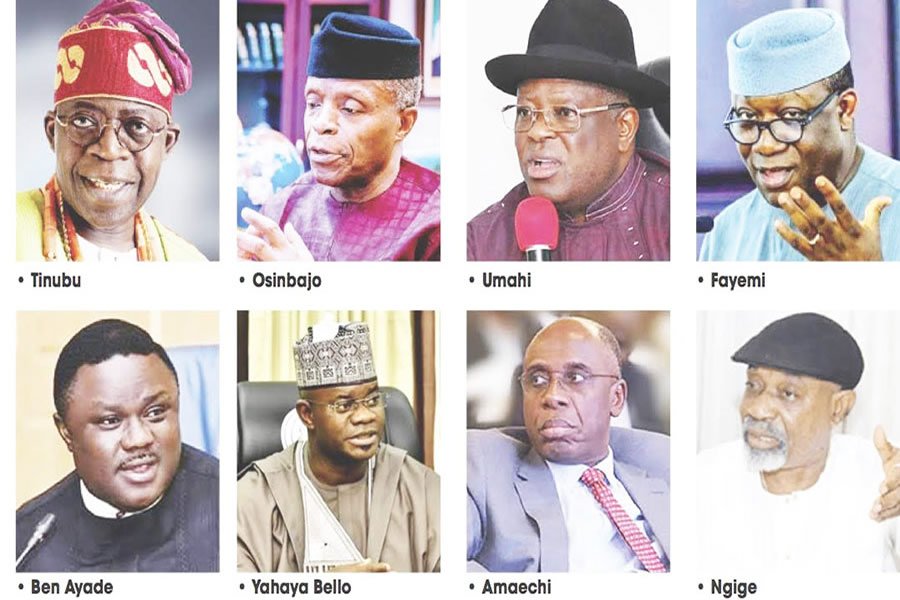 A meeting of  former presidential aspirants of  the  All Progressives Congress scheduled for Abuja on Wednesday failed to hold.

The postponement  of the meeting was announced a few hours to its  commencement.

The PUNCH gathered that the meeting was cancelled because of the non-commitment of the aspirants, many of whom had indicated that they would not be available.

One of the aspirants, Dr Nicolas Felix, in a statement on Monday, said those who contested against the APC presidential candidate, Bola Tinubu at the presidential primary, would converge on Abuja at 2 pm on Wednesday.

Felix said, “We will also brainstorm on adopting winning campaign strategies to support our standard-bearer, Bola Tinubu, and seek to carry every Nigerian along in our bid to coast home to victory in the 2023 general elections.”

But before the meeting was scheduled to start, Felix announced its postponement, stating that a new date would be announced. He, however, did not give the reason for the cancellation of the roundtable.

Felix’s statement read, “Please be informed that the strategic meeting of 2023 Presidential Aspirants of the All Progressives Congress, scheduled to hold on Wednesday the 31st of August has been postponed.

“A new date for the meeting will be communicated soon. Apologies for any inconvenience(s) that this might cause.”

The aborted meeting sought to address a number of factors such as a conciliatory move to reconcile aggrieved  members, challenges bedevilling the country, inclusive politics and adoption of winning campaign strategies to coast home to victory ahead of the 2023 general elections.

One of the aspirants who abandoned the parley, however, told our correspondent that the move by Felix, the youngest APC aspirant, to reunite all the aspirants, especially the aggrieved ones, was an effort in futility.

The APC chieftain, who pleaded anonymity,  further disclosed that the body language of the presidential aspirants and some party members who participated in the presidential primary was clear.

“I must say Felix has tried his best. But it is not his duty to call for such a conciliatory meeting. That initiative was dead on arrival. Both the party and Asiwaju himself have a lot of work to do before the 2023 election,” he said.

But another source disclosed that the event failed to hold because none of the aspirants showed up, noting that most of them were unhappy with Tinubu.

Also a source in the Tinubu campaign team, said Felix did not have the mandate to convene the meeting.

The source stated, “He is on his own. Nobody told him to convene the meeting. He did not carry other aspirants along. The meeting is not pro-Tinubu meeting.”

When asked if Governor Bello had any grievances against the APC presidential candidate, the Director of Media and Publicity for Yahaya Bello Presidential Campaign Organisation, Mrs Yemi Kolapo, dismissed the report.

Kolapo maintained that the Kogi State governor was committed to working for Tinubu’s victory ahead of the February 25 presidential poll.

She said, “You are listening to rumours. Has the campaign even started? If there is one aspirant that is totally committed to a landslide win for the APC presidential candidate in the 2023 election, that aspirant is Governor Yahaya Bello.

“Asiwaju Bola Tinubu is tested and trusted. And with the great support we have right now across the country, he will be the next President. Don’t let us create a crisis where there is none.”

The only female presidential aspirant on the platform of the party, Ohanenye,  said she could not attend the meeting because her mother was sick.

Asked why the Senate President did not attend the event, Lawan’s Special Adviser, Mr Ola Awoniyi, simply said he had not been briefed.

The media aide to the former Niger Delta Affairs Minister, Aniete Ekong, promised to find out why his principal did not attend the programme. But he failed to respond to subsequent phone calls from our correspondent.

Osinbajo could not be reached for comment on Wednesday as his media aide, Laolu Akande, did not respond to calls. He had yet to reply to a text message sent to him as of the time of filing this report.

However, he had earlier issued a statement early on Wednesday that Osinbajo travelled to the United States to attend an energy summit.

The development, it was learnt, might have been responsible for his failure to attend the APC presidential aspirants’ strategy session.

He indicated that the VP left Abuja for the US to seek global partnerships and support for Nigeria’s recently launched Energy Transition Plan.

The release noted the ETWG, which will be chaired by the vice-president, would equally have ministers and other top government officials in attendance.

As of the time of filing this report, the National Publicity Secretary of the APC, Felix Morka, could not be reached for reaction. Calls to his phone rang out and he had yet to respond to a text message on the issue.

But the Director of Media and Communications for Tinubu Campaign Organisation, Bayo Onanuga, defended the absence of the former Lagos State governor and his running mate, Kashim Shettima, saying they were not aware of the strategy meeting.

“We can’t be there because it was not a meeting of the presidential campaign council or the party itself. Besides, the candidate and his running mate are not aware of it.

“It was somebody’s initiative that I think was not well communicated. Although I can’t explain why it was cancelled,  maybe the presidential aspirants should tell you why they didn’t turn up.”

Tinubu had defeated former Minister of Transportation, Rotimi Amaechi; Vice President Yemi Osibanjo and 12 others to clinch the sole ticket at the APC Presidential primary on June 7.

He polled 1, 271 votes to emerge victorious at the end of the Special National Convention of the party on Wednesday in Abuja.

The race for the presidential standard bearer started with 23 aspirants, but nine withdrew shortly before the commencement of voting at the convention.

In a related development, there was a show of shame on Wednesday at the APC national secretariat when a group of APC youths loyal to Tinubu engaged security details loyal to the National Chairman of the party, Senator Abdullahi Adamu, in a free-for-all over the election of the National Association of the Nigerian Students.

The fracas, which occurred on the eve of the election to swear in new NANS executives slated for Thursday, saw the young party members converging at the entrance of the secretariat in protest.

The protest was led by Segun Dada, one of the former aspirants who stepped down for the current APC National Youth Leader, Dayo Israel.

Dada was said to have arrived at the secretariat, on the directive of the youth leader, to lodge a complaint during the National Working Committee meeting on how some elements suspected to be elements of the opposition Peoples Democratic Party planned to hijack Thursday’s NANS elections.

The young APC member and his ‘boys’ however met stiff resistance from the armed guards at the national secretariat.

To disperse the demonstrators, the security details shot several canisters of tear gas into the crowd, an action that led to a stampede with some of the students attempting to force their way in.

See also  President Buhari, Obasanjo all smiles as they shake hands at Council of State meeting in Abuja

The rowdy crowd forced the operatives to beef up security at the secretariat with additional men.

A source within the secretariat told our correspondent that the security details were acting on the directive of the APC national chairman not to grant access to the NANS members, adding that the students were attempting to disrupt a meeting of the party’s NWC which was still in progress.

He said, “Dada’s attempt and desperation to force his way with his delegation resulted in the police using teargas on him and others, which infuriated them, leading to the situation becoming rowdy.

“The surprising thing is that Dada is not a stranger at the secretariat because he worked for some years here. But, he was not, however diplomatic in handling the situation otherwise, it would not have degenerated to the extent of using several canisters of teargas to disperse them.

“Yes, Dada was on a genuine mission to brief the leadership on how PDP elements in APC have hijacked the election, as directed by the youth leader.

“But what we cannot understand was why he came with those hefty boys that fought the security agents. It was bad that the Chief Security Officer of the party was molested by those boys that came with Dada”.

Speaker of Lagos State House of Assembly, Mudashiru Obasa, has urged Nigerians to elect leaders based on competence,  rather than dwelling on the religious bias for the 2023 presidential elections.

Obasa made this known at the 14th Annual Hijrah Lecture organised by the Lagos assembly’s Muslim community at the assembly complex in Lagos on Wednesday.

The speaker said whether the political parties were running on Muslim-Muslim tickets or Christian-Christian tickets or otherwise, their focus should be on the good intentions of the contestants.

He said, “Let us not allow politicians to bamboozle us with religion as a determining factor for who we will choose as our leader.

“Therefore, at this time when Nigeria stands at its most critical juncture in history regarding the 2023  general elections, there is a crucial call for religious bodies to deploy their collective spiritual energies in not only undermining the negative forces of nepotism and dysfunctionality but in positively enhancing the development of Nigeria.”

The speaker added that as enshrined in the Constitution of Nigeria being a secular state, there was no provision for the elevation of a particular form of religion over another.

According to him, no religion should be in charge of the government. What we have is freedom of religion.

“In  some states of the country where either a Muslim or Christian had been in charge without any meaningful performance or development,  this invariably translates to the fact that religious faith does not determine the success of a given government at whichever level.”

The speaker said rather, a competent, qualified, accomplished, and knowledgeable individual, irrespective of their religious background, should be their focus.

Obasa said all over the world where democracy was being practised, it had been established that good governance was not determined by their religions.

He said, “In countries like the democratic states in Asia and some other parts of the world where neither Islam nor Christianity is being practiced,  it is gratifying to note that good governance is seen all around them.

“There is no doubt that Nigeria is at a precarious phase in its existence as a nation. These are indeed trying times for Nigeria and Nigerians.

“My opinion is that we should focus more on how the failure of politics and faith has compromised the unravelling of the Nigerian project.”

According to the News Agency of Nigeria, an Islamic cleric, Dr Ishaq Sunuusi, who was the guest speaker at the event, said that Islam was about peace, love, compassion, understanding and justice.

Former president of Nigeria Shehu Shagari passes on at 93