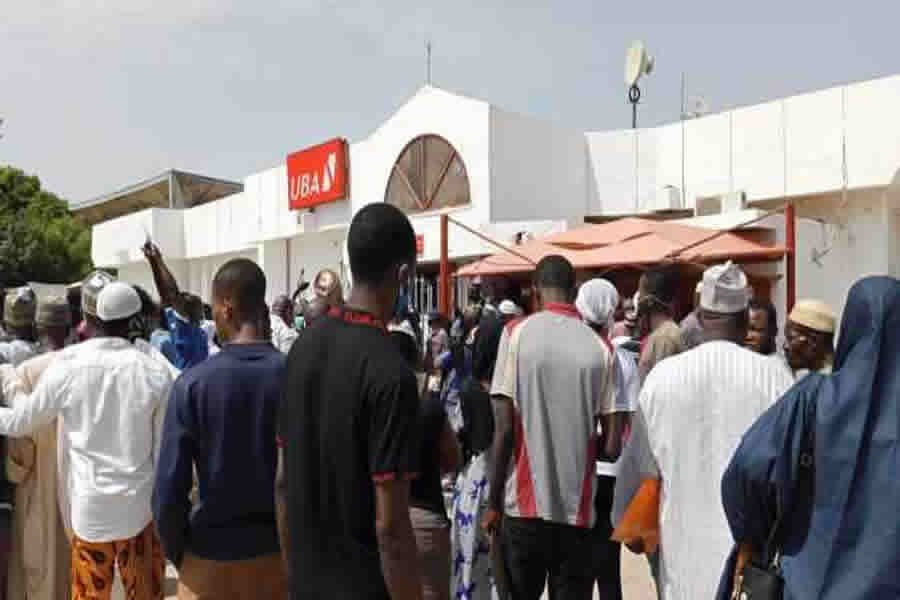 Banks customers on Monday besieged the banks in Lagos, Ogun and the Federal Capital Territory (FCT) as the Federal Government announced partial lifting of lockdown after a month-long sit-at-home order following COVID-19 pandemic worrisome spread in the states and the FCT. In Abuja, our correspondents observed around the banks’ branches at the suburb and within the city centre that all branches visited had huge customer gatherings at the banks with no regard to social distancing protocols. In some branches visited at Federal Housing Lugbe, Garki Area 3 Banking hub, and Central Area, Wuse 2, and Area 3, Abuja, hundreds of customers were sighted milling around the banks without consideration of social distancing protocols outside of the bank. A cross-section of the customers who spoke to our correspondent said they needed to withdraw some cash to feed as they had ran out of cash.

Some other customers said they needed to do transfers to loved ones and also pay debts. One of them, Joseph Bulus said: “It’s been difficult. I’m completely out of cash. I need some cash to feed because the account I have ATM on, is out of cash.”

At Stanbic IBTC branch in Kubwa, Abuja, a banker at the operations unit, who spoke on condition of anonymity, said customers were trouping into the bank and are everywhere. “The problem is they are not obeying social distancing rules and they are violent. You tell them to queue up, they refuse and because they are not obeying,a number of them are locked outside and we are allowing a few at a time. Yet, they are violent. So, if he/she has contracted anything, he is coming in with it. But we are keeping the rule of using hand sanitizers,” he said.

The story is not different in Lagos as customers came out in droves to do transactions in various banks, thereby defying the social distancing directive of both the federal and state government. One of the customers, who simplify identified himself as Mr. Taiwo told our reporter that other branches of First Bank in Somolu did not open to customers, as such, they were all directed to one branch. He said: “As I am speaking to, I am number 86 out of close to 200 of us waiting and we have just six hours to do whatever we want to do.

How can the bank decide to open only one branch knowing well that people will be eager to do a lot of transactions having been in door for over a month.” On his own part, Sadiq, a customer of Fidelity Bank at Ojota advised Nigerian banks to lock their gates, keep hand sanitizer at the entrance of the bank after the gate, then allow just 20 persons at a time inside the bank. In Isolo-Ikotun road, one of the banks, Stanbic IBTC, was shut and the security personnel told our correspondent that the branch was not opened. Zenith bank at NNPC had a crowd at the entrance, while a few other customers were sitting at the tent provided by the bank outside the gate. Access Bank, had many customers at its ATM. Although the bank made provision for water, soap and hand sanitizer close to the ATM, only a few out of the customers were using it.