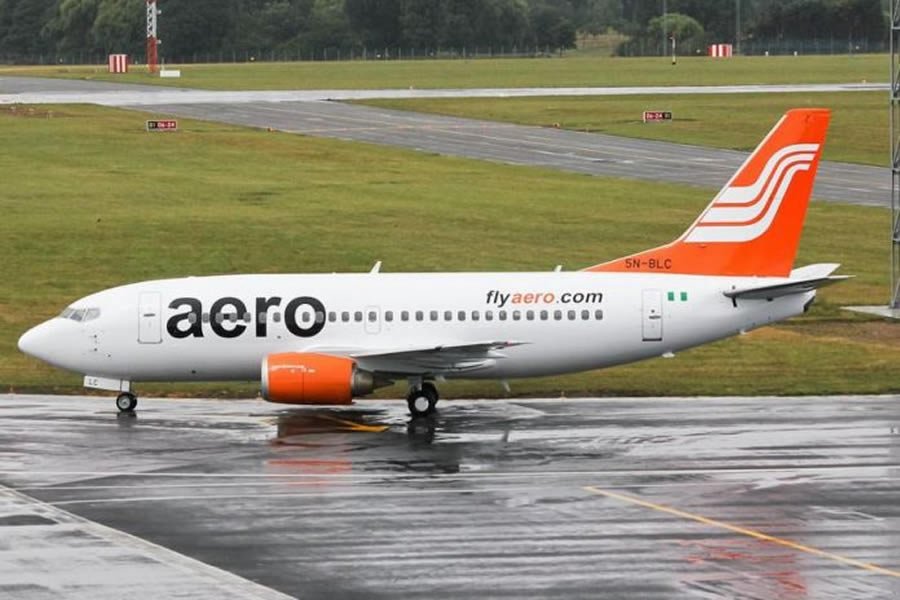 Passengers in their hundreds have protested at the local wing of the Nnamidi Azikiwe International Airport, Abuja against flight delay and unprofessional conduct by the Aero Contractors.

Newsmen report the protest took place on Tuesday at the counter of the airline and the boarding gate in the departure hall by the passengers who claimed their flights were delayed for many hours by the airline.

The passengers mostly, Sokoto bound from Lagos and Abuja said the airline kept them waiting at the airport for over 10 hours without any explanations from the officials except the routine announcement of “delay due to operational reasons”.

One of the passengers Mr Samson Makanjuola said he booked the flight from Lagos to Sokoto with a schedule to leave Lagos airport at 6.45 am arrive Abuja at about 7.45 a.m. and depart Abuja at 12.15 to arrive in Sokoto by 1.20p.m.

He said at about three hours into the layover in Abuja he approached the airline counter to check in to Sokoto flight but was told that the flight had been rescheduled for 4.pm.

Makanjuola and other passengers from Lagos and Abuja said they did not receive any notice on the flight rescheduling from the airline but got to know about it when they got to the airport.

Another passenger, Mr Tunji Oyeyemi who expressed disappointment over the airline’s unprofessional operations said he contacted the customer care of Aero contractor, severally over the delay but he got no response.

At about 4p.m the airline was said to have two separate flights to Sokoto with flight number 117 and 119 respectively.

The passengers said when one of the flights landed at the airport, rather than announcing boarding openly as it is usually done, the airline officials were selectively whispering to passengers at the departure hall, one after the other, to go and board.

When most passengers who they did not inform got wind of the development that some people had boarded the aircraft without boarding announcement, they openly expressed their anger in a near chaotic manner at the departure hall.

The passengers were later pacified with the assurances that an aircraft was coming from Lagos to take them to Sokoto.

However, the passengers said that while they were waiting, the airline, twice announced delay of their flight by 50 minutes respectively, simply attributing operational reasons.

When the third announcement of delay was made at about 6p.m. many of the passengers stood up spontaneously to protest at the departure gate while some move down to the airline counter.

The passengers said that besides the delay, information filtered to them that many of their checked in luggage had already arrived in Sokoto with the aircraft that left earlier while they were still held in Abuja.

They also complaint of no official communication, apology and remorsefulness from the airline with all what they were made to pass through.The aircraft eventually arrived the airport from Lagos at about 7pm.

There was, however, another round of protest by the passengers when their was delay in announcing boarding and news also filtered to them that the aircraft was to be diverted to Yola.

The passengers who were already charged and tensed, rowdily thronged the departure counter in protest insisting that the airline should announce their boarding

As the situation became chaotic and uncontrollable, boarding announcement was made and the passengers, without waiting for the routine checking of their boarding passes and identification means at the gate, trooped through the tarmac to the aircraft.

The aircraft eventually departed Abuja at about 7.50pm and arrived at the Sokoto airport at about 8.40pm.

Some of the passengers said that Sokoto was not their final destinations and they would have to bear the unbudgeted fund to pass the night in the city before proceeding the following day.

Both Oyeyemi and Makanjuola said they were going to Kebbi for the Argungu festival when they left Lagos at 6.45a.m hoping to get to their destination early.

They called on relevant supervisory agencies to call airline operators into order over delays, unethical conduct and impunity in rendering their services.

Reacting, Aero Contractors Airline expressed regret on its flight delay that occurred at Nnamdi Azikiwe International Airport (NAIA) on Tuesday. The airline made the apology during an interview with newsmen on Wednesday in Abuja.

According to her, others passengers that were left behind were afraid and taught, possibly there would not be other flight again.

She said the airline urgently organized for another flight that airlifted remaining passengers later by 6.45pm.

“There was delaying in flight operation yesterday. After our scheduled air craft boarded by 4.30pm, some passengers were still left behind.

The remaining passengers were afraid, thinking they had been disappointed.“We arranged light refreshment for the left over passengers before they were finally flown by 6.45pm by another aircraft we organized for them.“

We intentionally paid for extension fee to ensure the fight was not cancelled in order to please our passengers. You can see now that everything has been going on smoothly since morning today (Wednesday), “ she said.