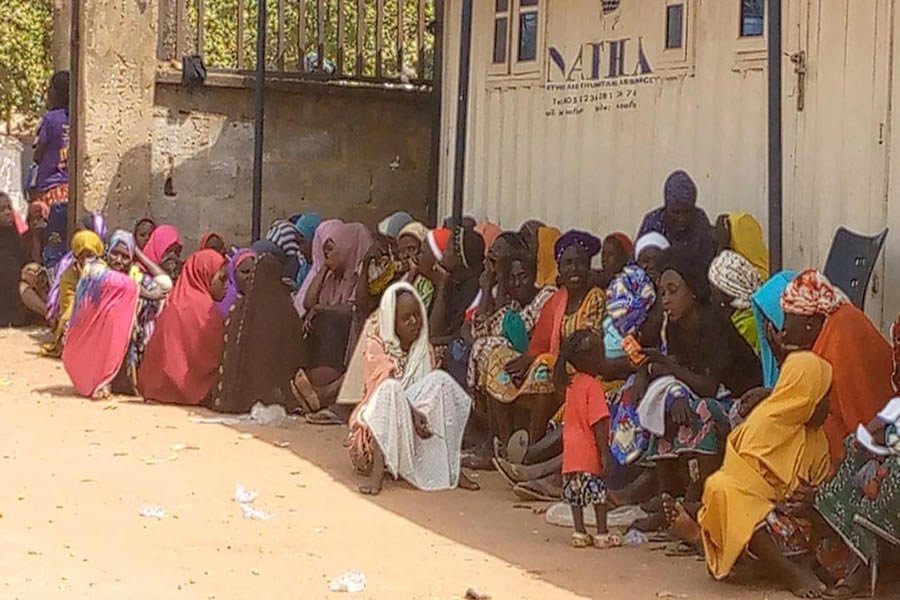 Say camp demolished without prior notice

About 3,000 people displaced from  Durumi Internally Displaced Persons’ (IDP) camp located at Durumi, Area 1 in the Federal Capital Territory (FCT), Abuja,  have cried out for government assistance to ameliorate their plight.

The make shift tents accommodating the IDPs were demolished following a security tip off that terrorists were using the camp as a hideout.
Lamenting their plight since December 21, 2022 when the camp was demolished, the IDPs said they and their children now sleep in open spaces as the women make nylon tents and burn firewood to keep their children warm at nights.

Chairman of the camp, Aminu Amadu, who narrated their ordeal to newsmen who visited the camp, alongside ActionAid Nigeria to donate relief items to the displaced persons, said he was at the camp when he leant that some government officials who claimed to be from the Presidency invaded the camp with 70 vehicles, conveying members of Joint task force and bulldozers to demolish their structures.

He said: “I went to meet the Commander of the operation and he just told me that we should start parking our clothes, and other important things we will need as they are going to demolish our place. I asked him on whose order they were coming to demolish our place because the government is aware we are staying here. He told me to go and meet the Minister. I felt they would have finished demolition before I come back from the minister because there were about four bulldozers at the camp.”

Woman leader of the camp, Iliayatu Ayuba, said: “I cried so much after the demolition, I don’t know why they decided to do this to us, government knows us, Commissioner for Refugees and Internally Displaced Persons knows us and they have been coming to the camp, they never gave us any information that they were coming to demolish because of the terrorists that were living in the camp with us.

“If they had informed us earlier we would have made better plans, they came and demolished everything, women and children are sleeping outside in cold weather.

“One of the women even delivered a baby before her time after she went into labour because of the demolition, after I delivered the baby , the baby didn’t cry until after an hour. Now the baby and the mother sleep in the cold. The woman cried and asked me where she would go with her baby.”
She said for several years government have been promising to relocate them, which they are yet to fulfill.

“I beg them in the name of God to fulfill this promise, we are human beings, we are Nigerians, where do they want us to go. Government is taking care of the refugees more than us, they can find a place where they are putting the refugees to keep us too.

“As of today, a lot of killings are still going on in Gwoza council. I was there three months ago, it was the military that escorted me to and fro my community, as of two days ago,  they still killed people there, so where do we go now,” she lamented.

Also, spokesperson for Abuja IDPs,  Idris Ibrahim said : “I want to appeal to the Inspector General of Police,  the Director of Security Federal Capital Development Area (FCDA), Director of  DSS FCT Command, to reach out to us as there are better ways of carrying out such activities.

“The Commissioner for Internally Displaced Persons and Refugees is not living up to expectations, as no one has reached out to them since the demolition, despite being aware.”

Country Director of ActionAid Nigeria,   Ene Obi in her speech,  said the  camp was demolished following insinuations of infiltration of the camps by insurgent groups and other criminal elements, thereby rendering 3,000 internally displaced persons (IDPs) from the Borno, Adamawa and Yobe states homeless with no source of livelihood.

She stated that the demotion was unexpected and has resulted in shock and trauma for the IDPs of which 70 per cent are women, children and elderly persons who are now suffering the impact of this action of the Federal Government.

She lamented that women and children currently sleep on open spaces, some with mats or blankets and others without foods, adding that starvation and hunger now prevail due to the loss of their saved food stuffs, and cooking utensils because of the unplanned demolition.

MEANWHILE,  ActionAid has handed over blankets, mosquito nets,  cooking utensils as well as   N10,000 to 70 vulnerable households in the camp.

One month after, another earth tremor hits Abuja