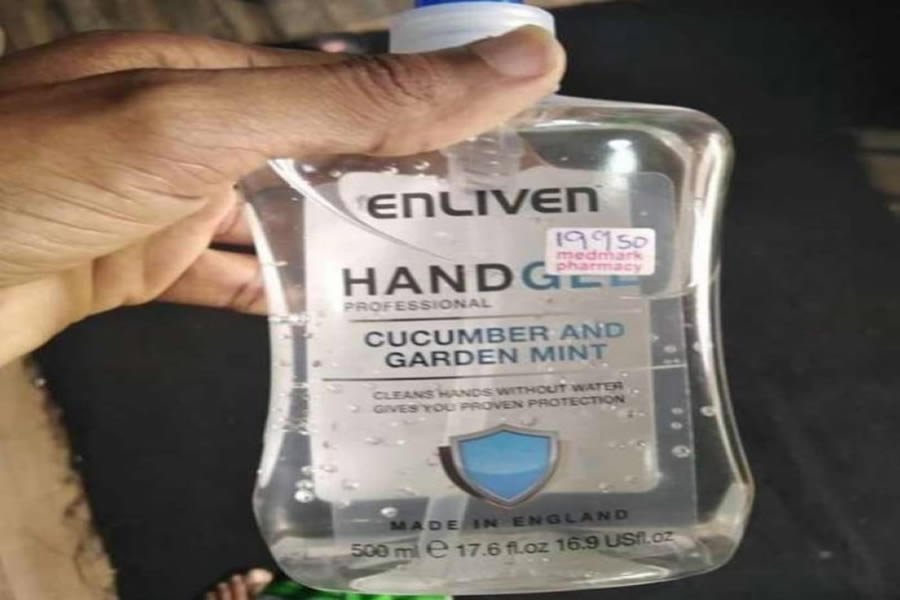 Hand sanitizers and other anti-viral protective and hygiene products may soon be included in the list of items the Central Bank of Nigeria (CBN) has banned from accessing foreign exchange for their importation.

The CBN governor, Godwin Emefiele, announced on Wednesday in Abuja that this was part of decisions being contemplated by the bank to conserve foreign exchange and support local production of the products.

The announcement followed an observation by the founder of Emzor Pharmaceuticals Industries, Stella Okolie, during the Consultative Roundtable on the economy organised by the CBN in Abuja.

Mrs Okolie had lamented the low patronage of her company’s products by government agencies which prefer to spend huge foreign exchange importing products local manufacturers are producing in Nigeria.

“I was shocked to see hand sanitisers from China being used here. But Emzor Pharmaceuticals has been manufacturing hand sanitisers for nearly 40 years without any order from the CBN, or any inquiry from the Federal Ministry of Health. We have a lot of sanitisers in stock, part of which were used during the breakout of Ebola disease.

“Local industries must not be neglected. We should find out who is doing what and who can do what and patronise them. We should look inwards. We have what it takes to build this nation. That is the way to grow the economy,” she said.

Mrs Okolie was contributing to the discussion on how to support government in its efforts to diversify the economy in the wake of the current global economic crisis triggered by the coronavirus pandemic.

Since the recent breakout of the coronavirus which has triggered global health concerns, the use of such products have shut up, with their prices increasing significantly.

In his response, the CBN governor apologised for the bank not using the hand sanitisers made in Nigeria.

“Let me apologise to Mrs Stella Okolie for the CBN using Chinese-made hand sanitisers. I am going to give the order that CBN will no longer buy foreign made sanitisers, since we now know that EMZOR Pharmaceuticals produces Nigerian-made sanitisers.

“Let it serve as an example to all other Nigerians. That is the only way EMZOR can continue to do well and contribute to the growth of the economy. We will pay in Naira to buy the sanitisers rather than using dollar to import sanitisers from China. Very soon, sanitisers will be included among the list of items that will be banned from accessing foreign exchange for importation,” Mr Emefiele said.

Earlier, the Minister of Power, Babatunde Fashola, urged Nigerians to turn the current coronavirus challenge into the country’s advantage.

“This country is blessed with all the ingredients used in manufacturing the hand sanitisers and other products we waste foreign exchange to import. This is the opportunity to say henceforth, no foreign hand sanitisers should be allowed to come into the country.

“With that, we will be giving our local manufacturers the opportunity to benefit from the challenge, and the economy will benefit from it,” he said.

In his presentation, the Chairman of Dangote Group, Aliko Dangote, who spoke on the need to diversify the economy away from oil, said this was the only way to avoid the crisis the country is facing today with declining oil prices.

He said the crash in oil prices has expedited the need for the diversification of the economy through agriculture and manufacturing, to help create jobs and establish the middle class. .

“With a huge local market of about 200 million people, apart from the ECOWAS market, there was no reason the country should be importing virtually every product the people consume.

“Our imports last year was almost about $47 billion. We cannot have a population that is growing at about 2.7 per cent per annum and we continue to import most of what we are consuming.

“We need to be more serious this time around in taking advantage of the opportunity this challenge presents. We are importing virtually everything, apart from a few iron rods. We don’t have a steel industry,” he said.

He challenged the entrepreneurs in other sectors of the economy, particularly in the banking sector, to diversify away from banking into manufacturing and find a way to promote the production of the things we consume.

Highlighting the areas government needs to focus its attention on to grow the economy, Dangote identified infrastructural development, provision of power, approval of low interest rates, and long terms funds.

He stressed the need for the continued support by the CBN through the provision of foreign exchange to those interested in local manufacturing as well as the need for consistency in government policies.

“If we were to manufacture the 27 million tonnes of cement we consume in Nigeria, imagine the impact that will have on our economy. All the port terminals that Dangote opened for cement importation, two new terminals have been built since then for cement exportation.

“If that were to continue, by next year Nigeria will be the highest exporter of cement in Africa.

“With the support of the CBN, we are building ten rice production plants, which by the end of this year, we will be producing one million tonnes of rice.

“For the first time, this year Nigeria will become the biggest exporter of fertilizer when our plants begin operation,” he said.