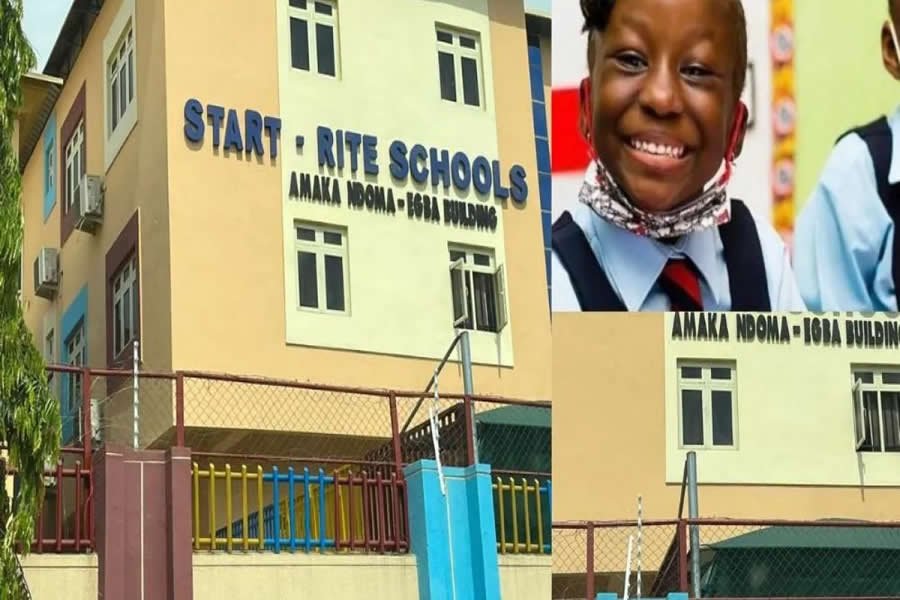 SaharaReporters had on Friday reported that the family of the girl, identified as Modadeoluwa, took to social media to seek justice over her death.

The Abuja school where a six-year old girl allegedly died after drowning in a swimming pool belongs to the late wife of former Senate Leader and ex-Chairman of Niger Delta Development Commission, (NDDC), Senator Victor Ndoma-Egba.
SaharaReporters had on Friday reported that the family of the girl, identified as Modadeoluwa, took to social media to seek justice over her death.
According to the family, Modadeoluwa drowned on Wednesday, November 02, 2022, in a swimming pool belonging to Start Rite School in Abuja.
A woman, who claimed to be a cousin of the deceased girl, alleged that the swimming instructor tossed her multiple times at the shallow end of the pool and she hit her head, thereby suffering internal bleeding.
She added that the school refused to take responsibility for the incident. According to her, the school has remained open and carried out its activities as if nothing happened.
“Startrite killed my baby cousin! She had swim day in school, the “coach “was teaching her a stunt, threw her up and she’d hit her head and had an internal bleeding. We asked for a footage and they released a doctored tape,” @oluwamiisimii posted.
“On the 2nd of November due to the negligent behaviour of @startriteschool my cousin was killed (child in the 2nd frame). We found a way to get evidence from the CCTV footage even though the school deliberately tried to cut the scenes of what exactly happened.
“Our efforts to access justice has been frustrated by the school. All we want is justice. She was only 6 years. #justiceforModadeoluwa (2).”
Another Twitter user, @David wrote: “My little cousin had a swim day at school apparently, the coach advised her to swim as far as possible and swim back, when she got back he tossed her multiple times in the air at the shallow side of the pool, she hit her head and had internal bleeding.
“Even with that, the coach was all the while pushing her in, we later requested the CCTV film and when we arrived, we saw them doctoring the tape. Presently the school is open like nothing happened and they aren’t assuming responsibility as well as misleading different guardians.”
@Bobanure also wrote: “On November 2nd 2022, my smart. Kind, beautiful 6-year-old cousine, Madade was killed by the negligence of the swimming instructor @sttartriteschool in Abuja.
“The school has refused to accept any culpability and have deleted the portion of the CCTV footage that shows what transpired in the pool. Please help us retweet and share until the school is held accountable.”
Efforts made by SaharaReporters to reach the school management for comments were not successful.
When the two mobile lines belonging to the school were called, female officials who answered the calls at separate times refused to react to the issue or direct the reporter to a staff member in a capacity to do so.
However, the Federal Capital Territory (FCT) Police Command spokesperson, DSP Josephine Adeh in a statement said that investigations revealed that the deceased didn’t die by drowning but as a result of food aspiration asphyxia.
She said; “The death of Modade Lawal is indeed a pathetic one. However, investigations so far have revealed that she didn’t die by drowning but as a result of food “Aspiration asphyxia”.
“On the 2nd of November, she had a swim day as part of the school curriculum and had earlier celebrated her birthday that same day before hitting the pool in the company of other pupils, under the supervision of the Lifeguards, instructors, and teachers.
“At about 11:45am, while being coached, the instructor noticed she wasn’t properly responding as she naturally would, he stopped and brought her out of the 4 -2 feet deep poolside to examine her and noticed she was having difficulties in breathing.
“The school medical team was alerted and she was taken to the hospital where she sustained a series of further heart attacks. The doctor struggled to revive her but she was confirmed dead at about 6:45pm of the same day.
“While enjoining members of the public to remain calm, it is worthy of note that the deceased has been buried by the family and discrete Investigation continues. Subsequent development will be communicated,” she added.

SaharaReporters on Friday gathered that the school is owned by the late wife of former Senate Leader and ex-Chairman of Niger Delta Development Commission, (NDDC), Victor Ndoma-Egba.
Amaka Ndoma-Egba alongside six others, in November 2020 died in a ghastly auto crash in Ondo State, while about eight others sustained various degrees of injuries.
The crash involved a truck, a commercial Toyota Avensis bus, a Honda car and a Toyota Coaster bus belonging to the Sports Centre of the Adekunle Ajasin University, Akungba Akoko (AAUA).
The Senator in 2021 launched Victor and Amaka Ndoma-Egba Foundation in memory of his wife, Amaka Ndoma-Egba.

Family, others honour Abacha with colloquium in Abuja