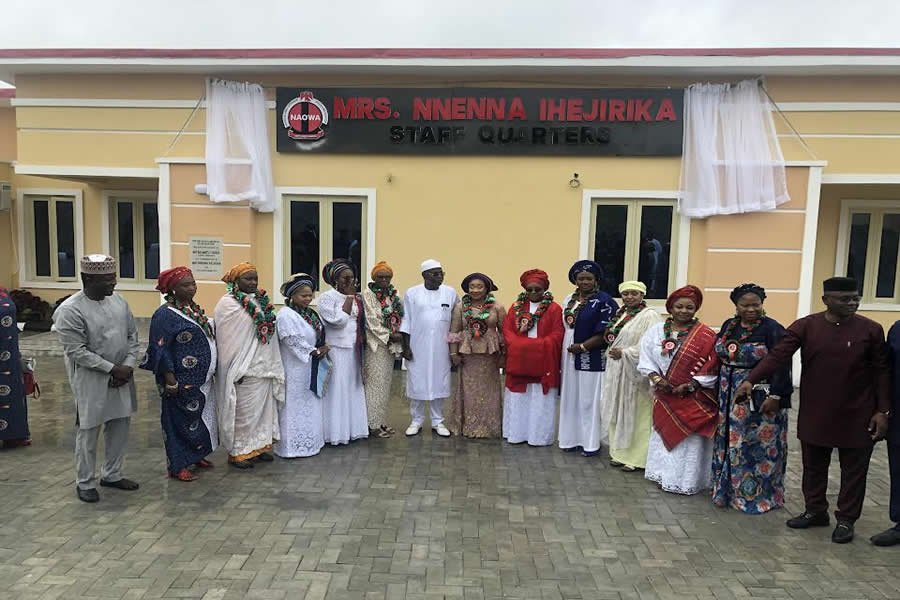 The Nigerian Army Officers’ Wives Association,(NAOWA) has commissioned the newly built staff quarters for teachers of NAOWA College and a 500-capacity multipurpose hall for NAOWA Model Nursery and Primary School in Abuja.

The projects located at the school premises at Asokoro, were named after some last NAOWA presidents, namely Mrs Martha Bamayi and Mrs Gift Nnena Ihejirika. While Mrs Bamayi established the NAOWA model school in 1999, Mrs Ihejirika established NAOWA college in 2013.

The association equally presented awards to Some deserving members of staff including teaching and non-teaching for unblemished years of meritorious service.

In her address at the occasion, the president of NAOWA, Mrs Salamatu Yahaya while noting that the structures were products of her vision of “Sustaining Legacies and Upholding the Tenets of Unity and Service”, said past leaders of the association had carved a niche for themselves and secured ample space in the association’s hall of fame through their remarkable leadership styles and establishments of sustainable legacies.

She said sustaining these legacies through maintenance of existing structures, construction of additional structures, standardisation of all facilities and enhancement of quality services through capacity development programmes for NAOWA members and staff, are the operating principles of her vision.

She said “This Commissioning Ceremony is an avenue to celebrate and immortalize two great NAOWA past Presidents who have made noteworthy impacts in the growth structure of NAOWA.

“This is indeed our way of showing respect and also engraving continuity as a mantra in the leadership structure of NAOWA at all levels.

“It is also a way of preserving history for the benefit of NAOWA members, prospective leaders. staff and students of these institutions, as well as the public at large,” she said.

Continuing, Mrs Yahaya, said that the 19 members of staff who have put in an average of 15 years in service in the two schools were rewarded with gift items as a way of showing appreciation for their hard work, commitment, perseverance and determination in the developmental process of the School.

She commended the Chief of Army Staff, Lieutenant General Faruk Yahaya, commandants of army institutions, commanders and other senior military officers for their support of the projects.

In his address, the Chief of Army Staff, Lt.-Gen. Yahaya commended the efforts of the past and present leadership of NAOWA for their foresight in supporting the educational development of the Nigerian army.

The COAS, who commended the officers’ wives for taking the lead in addressing the needs of their homes as well as supporting meeting the educational needs of their children, pledged his to support NAOWA in their quest to touch lives within and outside the barracks.

In her address, The President, Defence and Police Officers’ Wives Association (DEPOWA), Mrs Vickie Irabor, who commended the vision of the past presidents of NAOWA who established the schools that had become flagship in the military community, said the women had continued to hold the home front fronts while their husbands were being deployed in various fronts to confront security challenges.

Also speaking, Mrs Bamayi thanked the NAOWA president for recognising her contribution to the development of education in the Nigerian army and urged the association to sustain the vision of the founders and continue to build on the existing structures.

In her part, Mrs Gift Ihejirika, who commended the successive NAOWA leadership for sustaining and expanding the legacy of the past leaders, thanked Mrs Yahaya for acknowledging and remembering her for the honour to name the college’s staff quarter after her.