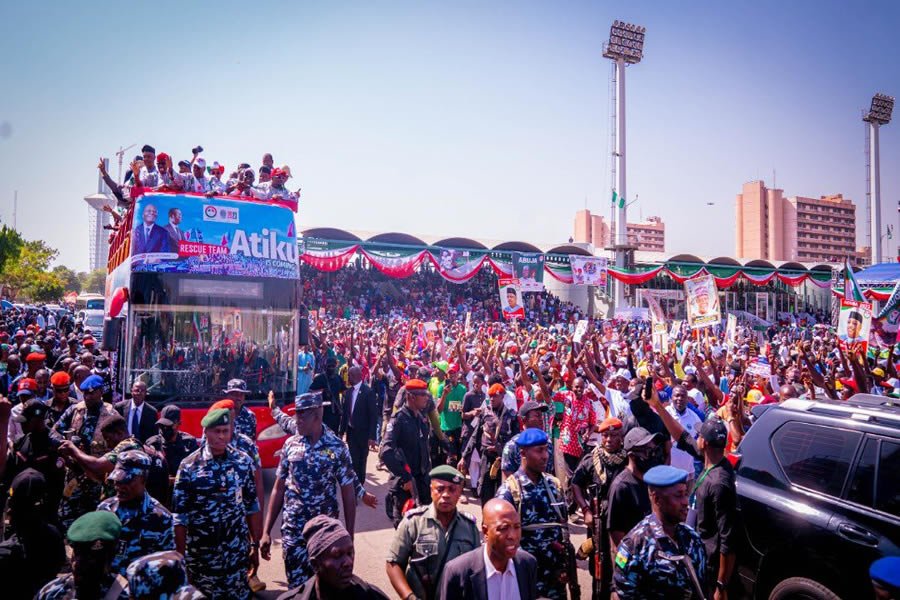 I’ll give you your entitlements, appointments, Atiku tells Abuja indigenes

“All the appointments that belongs to Abuja will be given to Abuja. We will review the Constitution to ensure that your aspirations are captured within, and in the process of restructuring the country, we will give you what you want.”

The PDP presidential candidate, Atiku Abubakar, says he will give the people of the Federal Capital Territory (FCT) all their entitlements without flinching, if voted into power in 2023.

Atiku made the promise at the party’s campaign rally in Abuja on Saturday during which he delivered his manifesto to the residents who turned out in large multitude for the event.

Addressing the crowd, Atiku said the PDP will do more than what its administration did in the past.

“We shall give you all your entitlements under the Constitution,” he said. “All the appointments that belongs to Abuja will be given to Abuja. We will review the Constitution to ensure that your aspirations are captured within, and in the process of restructuring the country, we will give you what you want,” he said.

Atiku’s promises come amid clamour for inclusion and better representation of Abuja indigenes in appointive and executive positions.

Many times, the FCT senator, Philip Aduda, had complained of little or no inclusion of the FCT indigenes in appointments made by President Muhammadu Buhari and sent to the Senate for confirmation.

See also  Dino Melaye should surrender to the police already, this New Year drama is sickening

And each time the lawmaker complains, his observations are only noted and very little is done.

Mr Aduda and many other Abuja residents have argued that the FCT minister should be an indigene of Abuja. He had also moved for the nation’s capital to have a mayor who would act like the minister but his proposal was voted out during the constitutional amendment.

This is one of the “anomaly” that Atiku is promising to fix.

Atiku also promised to secure the nation’s capital which has been threatened by attacks and kidnappings recently. He assured residents that he will “protect and secure Abuja.”

Abuja residents, he said, will be the first to feel the impact of the government before other citizens. He also promised to unify the city, open up universities and make sure they remain open.

While he thanked the residents for their loyalty and consistently voting for PDP, he promised that he will pay back with security and a revived economy.

He said Atiku is ready to lead the country to the level where its economy would be booming again.

Mr Okowa urged women and youths to canvass votes for PDP from house to house, market to market.

“At this moment we require a man with great experience to lead us as a country,” he said.

He urged that they vote for Atiku again in 2023 because Nigerians no longer “want a president who does not care or does not know what to do.”

Atiku, who was the PDP presidential candidate in 2019, won the election in Abuja that year.

He polled 259,995 vote to defeat his closest contender, President Muhammadu Buhari of the APC, who polled 152 224 votes.

President Buhari’s remarks at launch of AYCAC 2018 in Abuja
President Buhari, Obasanjo all smiles as they shake hands at Council of State me...
Northern governors meet with traditional rulers in Abuja over insecurity
previous post

How will one ‘Jubril’ preside over FEC – Osinbajo queries