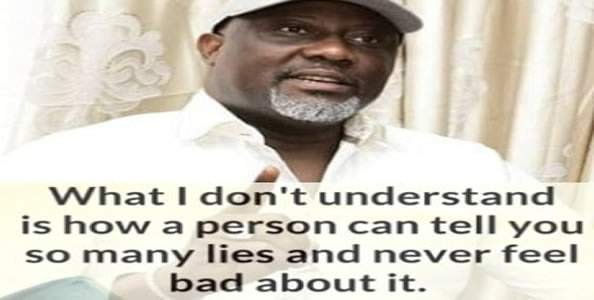 Each time Senator Dino Melaye kicks off his theatrics, I keep being reminded of what Leonardo da Vinci said to the effect that the greatest deception men suffer is from their own opinions.

If Dino is not pacing up and down Bourdillon road in Ikoyi, Lagos, especially in front of Asiwaju Bola Ahmed Tinubu’s residence, to demonstrate that he has come to bard the ‘lion’ in his den, he’s busy jumping off a moving police vehicle to escape arrest. The icing on his cake, as it were, was his latest mysterious escape from his unrelenting pursuers (he has now identified as policemen) who were firing with their smoking guns on Abuja-Gwagwalada road enroute Lokoja recently before he dashed into a nearby bush and lay on a tree like a monkey for almost 12 hours, to safety.

Before this disclosure by the didactic actor otherwise known as Dino, his friend and fellow Senator, Ben Bruce made it known that Dino Melaye had been ‘kidnapped’ and that made ‘common sense’ to this South-South guy who wants me to believe he’s the most commonsensical honest and sincere man in government at any level in this country.

Of course I have no quarrel with that, except that the man Ben Bruce needs us meet so that he can convince me about his pontification and piety.

Bruce may not know me, neither may not have come across my name but I know him fairly welll. I know he’s an offspring of the owner of Domino Store in a cornerpiece building between Alagomeji and Sabo in Yaba where I used to pick up some fine bread and other pastries when I shared a residential building with Biodun Sobanjo at Okobiriki in Alagomeji in the early 70s before he shot out like a rocket to become the Czar of Advertising of the modern era.

Ben may not also remember that I facilitated his seeing Chief Dapo Sarumi in his Radio House, Abuja office in 1999 when the latter held sway there as the nation’s minister of information and I, his temporary Special Assistant. He had come bearing a message from President Obasanjo which ultimately led to his emerging as the director-general of the Nigeria Television Authority.

That, I know, was the beginning of the transformation of Ben Bruce from a show impresario to a big policy maker in Nigeria. If in some years soon, he waltz his way from the Senate to the Presidency of the country, he will be in good company with an American film star who later become the most powerful president in the world being America’s helmsman.

I know Art Alade was well schooled in comedy, TV presentation et al, and must rank one of the most celebrated TV personalities between the late 60s and until he passed on years ago. I cannot remember he made so many millions in his entire TV career, although no one can dispute the fact that he made better impact on TV than Ben, whose father though, made good money as owner of indigenous department store that ranked next in status to Kingsway, UTC and Leventis Stores at the time.

I’m anxious to meet with Ben, for us to discuss if he has heard about a three-bed luxury apartment in Knightsbridge area of London where some cool bucks that may not be more than ten million naira a year, is paid as parking fee in the high rise building basement car park; and whether that investment by whoever owns the apartment (which Ben and I must unravel) makes common sense in the face of the grinding poverty in our land.

The cock and bull stories of abduction, kidnap and perching on trees being bandied around by Ben Bruce and his colleague, Dino Melaye, I say with all the emphasis at my command, are stuff that may sell better than the local television series, “Tales by the moonlight”. Their stories may sound plausible to some ears but I refuse to buy into them. They make me remember a line in apala philosopher, Haruna Ishola’s song that whoever puts a stone on fire in a cooking pot and tells people he is boiling yam, only he will eat his ‘yam’ when it is done. “Opuro ngbin’la, oniwayo ngbin’gbado, ninu oko t’alabosi nda, e o raiye; a o m’eni to se ba se po ninu eke pelu alaida, apegan aiye papo, be ri won, won o ki nilari.” The lyrics here is about the liar planting okro while the dodgy is also planting maize in a farm being cultivated by the hypocrite; wondering which of them to cut a deal with, because they are all bonded in hypocrisy and mischief.

I can’t but remember and agree with what a very cerebral Imam said at an event in Lagos recently: “whoever is seen to be upholding the truth in all situations, is of God”. Yet when a Dino and a Ben join a church congregation, it is simple common sense to applaud their presence as the most distinguished.

Lagbaja and Simi thrill at Johnnie in Abuja