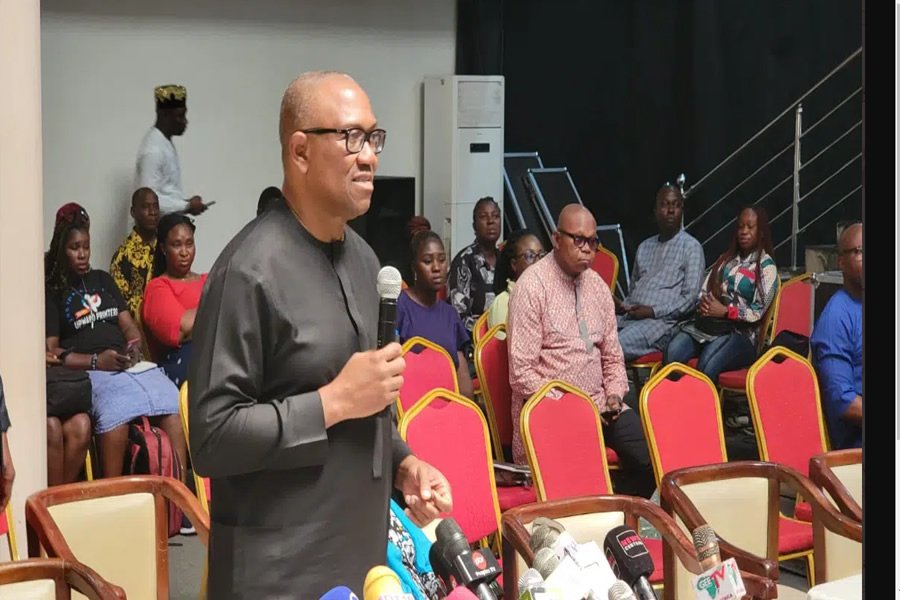 Labour Party (LP) presidential candidate, Peter Obi, has arrived at the venue of the Presidential Dialogue with the leadership of the Christian Association of Nigeria (CAN) in Abuja.

The former Governor of Anambra State and some chieftains of the LP arrived at the meeting venue shortly after the Peoples Democratic Party (PDP) presidential candidate, Atiku Abubakar, and stakeholders of the party had interacted with the religious leaders.

Naija News understands that presidential candidates were invited for an interactive session with the CAN leaders to share their ideas and concerns regarding the nation ahead of the forthcoming 2023 general elections.

The event is being held at the CAN Headquarters at the Christian Ecumenical Centre in the Federal Capital Territory (FCT).

Meanwhile, Obi had earlier met with the High Commissioner of Canada to Nigeria, H.E. James Christoff.

The presidential hopeful, in a post on his verified Twitter handle, said he had an animated conversation with the foreign official as he was able to share his perspectives on the envisaged rebirth of a new Nigeria.

PDP on Tuesday replied to the presidential candidate of the New Nigeria Peoples Party (NNPP), Rabiu Kwankwaso, over his assertion that the party’s flagbearer, Atiku Abubakar, should forget about the 2023 general election.

According to the PDP, the assertion was his opinion and that he should face his campaign.

Naija News reports that the party said Nigerians showed them love at its already-held rallies in Borno, Kaduna, Akwa Ibom and Gombe, indicating that its strength and greatest assets lie with the people.

The PDP said contrary to Kwankwaso’s claim; there is nothing to show or prove that the party will lose the 2023 presidential election in Lagos, Rivers and Kano States.

Naija News reported yesterday that the NNPP flagbearer submitted that Atiku might lose the 2023 election.

Kwankwaso said on Monday in Rivers state that Atiku needs the votes from at least two of Lagos, Kano, or Rivers states, but the PDP candidate currently doesn’t have any of the three.

He wondered where the PDP and Atiku plan to get enough votes as Kano is already out of reach with him out of the party, Rivers is threatened with Nyesom Wike’s current stand, while the PDP also does not have any stronghold in Lagos State.

However, the PDP Spokesman, Debo Ologunagba, said in his response that the assertion by Kwankwaso was his opinion, and he is entitled to it.

Ologbondiyan told The Nation that the PDP would not be distracted by such comments because it is sure of victory at the polls next year.

See also  How will one ‘Jubril’ preside over FEC - Osinbajo queries

The PDP spokesman noted that the quality and capability of the party’s presidential candidate and his running mate, Dr Ifeanyi Okowa, can’t be beaten.

FG extends resumption of Abuja-Kaduna rail service for one week