Operatives of the Economic and Financial Crimes Commission, EFCC, have arrested six suspected Internet fraudsters in separate raids carried out at various times across a number of locations in Abuja, the Federal Capital Territory. 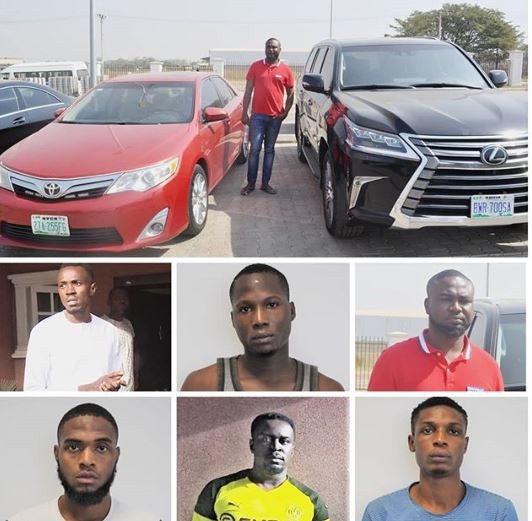 Ezeife was arrested on January 16, 2019 at the Life Camp residential area in Abuja, following intelligence reports of shady activities traced to him. Among items recovered from him were a Mercedes Benz C300, Toyota Camry and Lexus Jeep, Seagate hard drive, four laptop computers, an ECOWAS international passport, various wrist watches, two iPhones and blackberry phones, and a Samsung phone. Several suspicious emails were also traced to his account.

Investigation into the activities of another syndicate traced to the Nova Estate in Apo, led to the arrest of Joel and John (both brothers). John the younger of the brothers confessed that he got involved in Internet fraud as a student of the Delta State University.

He successfully defrauded one Miss Lynese from Zambia, using Facebook, in the guise that he was one Carlos Gomes, a British citizen. Among items found in his possession were an iPhone 6 and iPhone 7, and he confessed to having a landed property in Benin, Edo State, all of which he acquired for N1 million he made from Internet fraud. Two laptop computers, a white Range Rover Sport, white Mercedes Benz E350, and a grey Toyota Camry.

His brother Joel confessed that he got into yahoo yahoo through his brother, and asked him to teach him how to go about love scam.

“Thereafter, I tried to create an email account, but I was unsuccessful”, he said, adding that his younger brother bought him a wrist watch worth N6, 000, which he is willing to forfeit to the government, “if given the opportunity”.

The residence of a seventh suspect, Owootomo Tomilola Sunday, 22, was also raided at the Gwarimpa axis following tip-off of his shady activities, and is suspected to be into “Yahoo Plus”, also called “Wire Wire”. He is involved with hackers who compromise e-mail of multinationals and other prominent companies.

Among items recovered from Owootomo who is currently at large, are two Bugatti cars, a Mercedes Benz GLK, Mercedes Benz car, Porshe, $49,000 and duplex worth N300 million. They will be charged to Court as soon as investigations are concluded.

Ex-Chief of Defence Staff, Badeh to be buried, Jan. 23 – Military