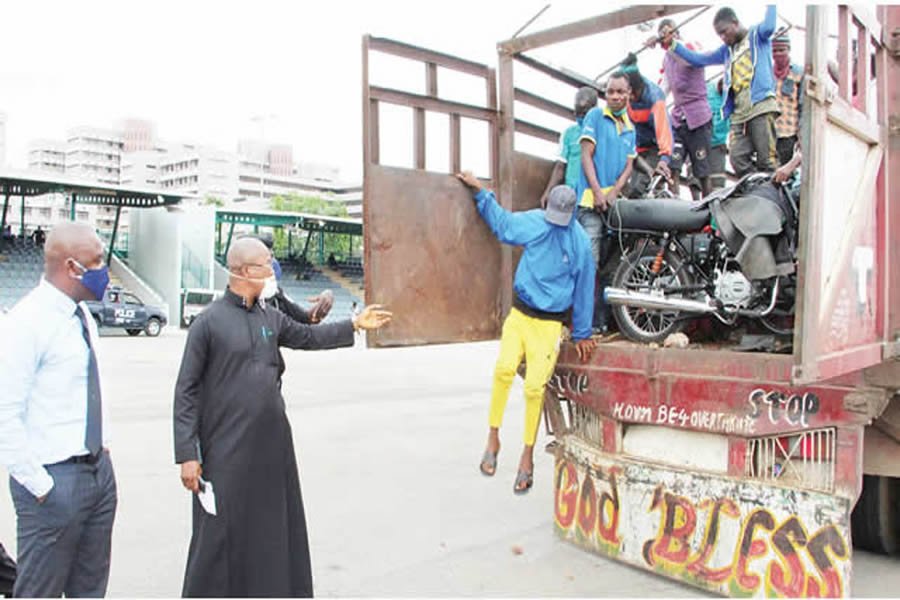 FEDERAL Capital Territory Ministerial Enforcement Task Force on CO- VID-19 Restrictions has arrested 29
commercial motorcycle operators, popularly called Okada riders who were on their way to Lagos.
The team said the motorcyclists were hiding in a truck with registration number LFA 837 ZX, which left Lafia in Nasarawa State, but was
intercepted yesterday at the AYABridge in Asokoro District of the FCT.
Driver of the truck, Samaila Samiya, said he was carrying fine stones used in making marbles and tiles loaded in Taraba State and
was heading to Lagos, but that on getting to Lafia, he decided to pick passengers after they agreed to pay N2,000.

Musa Simon, a passenger on the truck, said he was a commercial motorcyclist who left Lagos in the wake of COVID-19 lockdown and
was returning with others apprehended to resume work following threats by motorcycle owners to sell off their motorcycles should
they fail to resume work.
Addressing newsmen in Eagle Square where those arrested were arraigned before a Mobile Court, Chairman of the Task force
team, Attah Ikharo, lamented that “despite the series of arrests, prosecution and turning back of violators by the FCT Administration, many
persons are yet to fully comply with the Presidential directive on inter-state travel ban.”
He said the truck and all its non-human contents would be impounded until the COVID-19 restrictions were lifted.