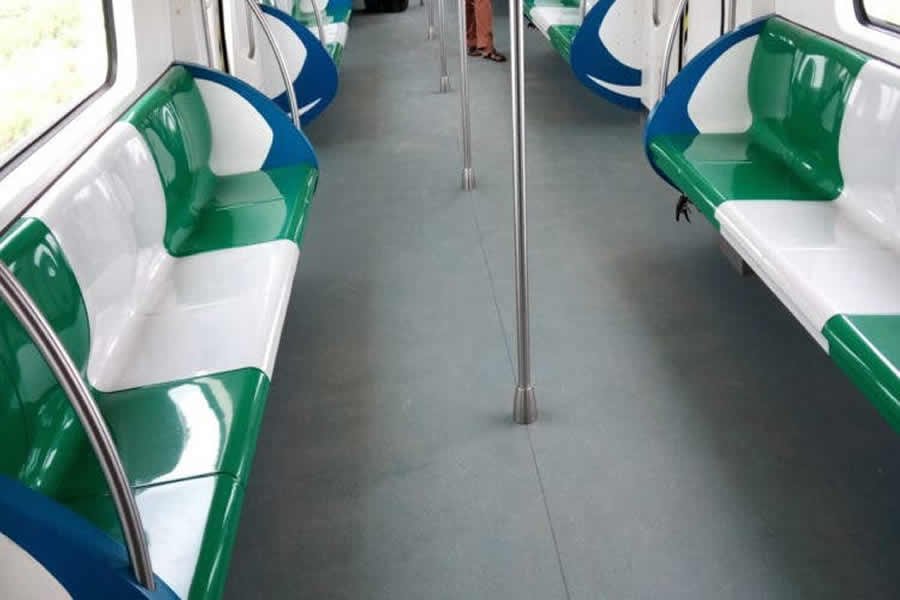 The magnificent Abuja Metro railway station within the heart of the Federal Capital City in the past few months have welcome very few passengers, the station is almost in an idle state.
Tribune Online visited the station, our reporter observed that the train was not working, the place was quiet with few personnel hanging around, there was only one car parked at parking lot.
One of the personnel who spoke to Tribune under the condition of anonymity said “since the beginning of the year, the train has not been working well, you can’t predict when the train will come.
“Passengers have not been coming here, you see the place is empty, this is how the place usually is most of the time, people complain that the station is too far” she stated.

Except for the Idu station which is house by the Nigerian Railway Corporation (NRC) connecting passengers who have come into Abuja from Kaduna by train and are heading to the airport, the only station within the city center is located in difficult a terrain to be accessed.

Originally, the station was supposed to have been located between NNPC and Danziya plaza closed to GSM village. This location was perfect as it is along a major road from Wuse Berger to Area1 and Area 3 of the Capital city.

But compensation issues which also delayed the timely completion of the project, especially with the management of Danziya plaza who had taken the FCT administration to court discouraged the Administration who wanted to commission the project.
Therefore, FCT Administration decided to build the station before the designed location.

A passenger who had come with the train from the Metro station to the airport, Bunyamba Lawan Esq had complained that, “If you compare the cost of even accessing the station, it will discourage you from using the train. One will spend at least  N600 to get to the station and then, pay high fare. There is no comparative advantage.
“If you also look at the speed, there is also no comparative advantage. If I am driving, from the metro station to the airport will not take me more than 20 minute, so why should i waste my time coming to train station when again I will have to wait for hours before I would go with train and again it will take longer’, the passenger lamented.
The China Civil Engineering Construction Corporation (CCECC) funded the rail project with $157 million being 85 percent total sum of the project while federal government was to contribute $37 million being 15 percent of the project total cost.
Bunyamba had questioned the sustainability of the train service noting that, “it is a massive project without a strategy for sustainability. The project cannot be sustained unless the privatized it.
How can you be running empty train and you are quiet about it, no advertisement, no marketing, nothing yet the train is running empty, it is simply unwise” he stated.
Abuja light rail service has a total of 11 stations, 5 station for lot1 and 3 stations for lot3 being the phase that has been completed out of the over 5 phases of the total city rail project however, only 3 stations, metro, Idu and airport are functional though Bassanjiwa, and Kukwaball looks completed, they are not functional.
Abuja light rail project was awarded to CCECC Nigeria Limited on May 23, 2007, but work started two years later. The revised contract sum was $823,540,545.87 for the double track rail line.
Though the original date of completion was May 28, 2011, the contract was revised again on the August 24, 2014 with the completion date slated for December 31, 2017.
Lots 1A and 3 comprises 1,435 km gauge, 12 stations, 50 culverts 13 railway bridges, 25 flyover bridges, rolling stock depot comprises 21 buildings, namely: Operation Control Centre, Trauseining Centre, Maintenance Crew Staff quarters, Comprehensive Maintenance building, oil pump room, waste water treatment room, and deep well pump room.
The segments, which were inaugurated were Lots 1A and 3, which covers only 45.245 km. This shows that only 16 percent of the rail network has been covered.
With just a fracture of the rail route covered, and the metro station build in an isolated area that is not easily accessible, and considering that the other stations excerpt Idu and airport are not functional, people from Nyanya axis, Kubwua and other part of the town consider it unwise to use the service as it is more expensive and a slow means of transportation.
Giving the current state of Abuja Metro rail service, who is benefitting from the empty moment of the train! And who is paying for the losses? This are questions left unanswered.
Tribune

19-yr-old boy surprises his girlfriend with a benz, iWatch and iPhone X Max for her 16th birthday

This is heartbreaking. Can do better