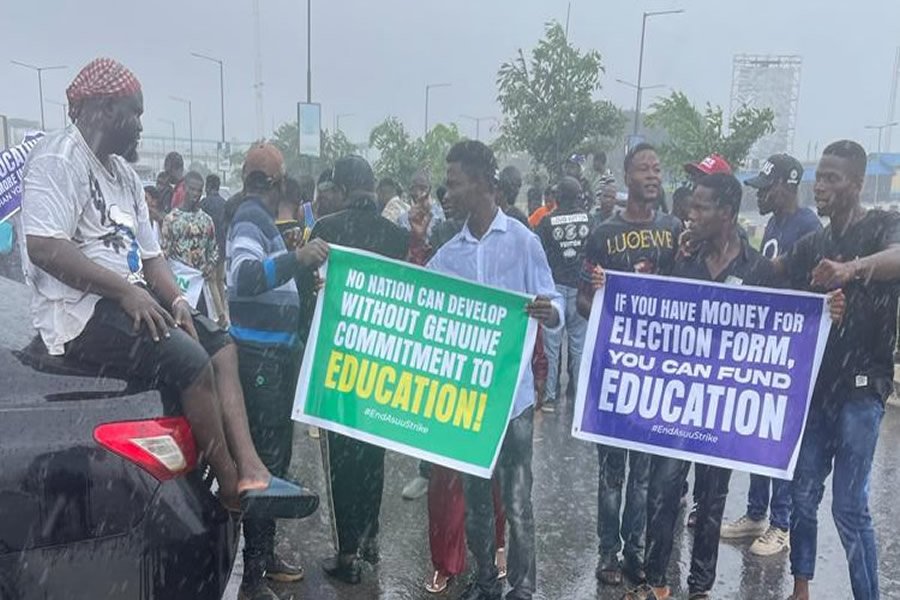 The National Association of Nigerian Students has said its members will block the Nnamdi Azikwe International Airport, Abuja and Kaduna-Abuja Expressway on Wednesday (today) as part of its protest against the ongoing industrial action by the Academic Staff Union of Universities.

The PUNCH had reported that students, on Monday, blocked the access roads to both the local and international terminals of the Murtala Muhammed International Airport, Ikeja, leaving air passengers and others stranded.

Speaking to The PUNCH on Tuesday, the chairman, NANS National Task Force, ‘EndASUUstrike,’ Olumide Ojo, said students did not protest at the Apapa Port as earlier scheduled for Tuesday to allow them strategise and plan for an impactful protest on Wednesday.

Ojo said, “We decided to use today (Tuesday) to appraise our protest on Monday at the Murtala Muhammed International Airport, Ikeja. By tomorrow (Wednesday) morning, we will be grounding the Nnamdi Azikwe Airport, Abuja and Kaduna-Abuja Expressway.

“We will also be at Iwo Road, Ibadan where we will hold a press conference. It will be a simultaneous action. On Thursday, our colleagues in the South-South and South East will mobilise for a showdown too.”

The Coordinator of the South West Zone D of NANS, Adegboye Olatunji, also confirmed the Wednesday plan, saying “Yes, there will be protests at the Abuja Airport on Wednesday.”

Also speaking, the National President, NANS, Usman Barambu, said Nigerian students had overstayed at home, saying the government should open the universities so that students could go back to school.

A letter written by Barambu to some organs of the association, a copy of which was obtained by The PUNCH on Tuesday, indicated that the students’ protest would last till October 11, 2022.

Meanwhile, the Kaduna State Government on Tuesday warned the students against moves to block the Kaduna-Abuja Road.

The tate Commissioner for Internal Security and Home Affairs, Samuel Aruwan, explained that while the state government was not depriving citizens of the right to express discontent, public security and safety must always be the foremost consideration.

The statement read, “The Kaduna State Government wishes to remind members of the public that any move to block the Kaduna-Abuja Road (or any routes) to express dissatisfaction, is unacceptable and a prelude to the breakdown of law and order.

“The danger of barricading a strategic route like the Kaduna-Abuja Road is better appreciated within the context of ongoing security operations covering the route, and other areas of interest. Citizens are therefore strongly advised against participating in such processions.”

“All I can say is that we have security agencies at the airport. Nobody will open his or her eyes and allow someone to put their hands in the eyes,” she told our correspondent.

The stakeholders’ meeting called by the Speaker of the House of Representatives, Femi Gbajabiamila, on Tuesday over the strike was inconclusive, forcing the leadership of the House to call further meetings with other stakeholders.

Gbajabiamila, at the end of a closed-door meeting that lasted about five hours, said the lawmakers resolved on seven points which he would not disclose as there was a need for further engagements.

The Speaker, however, disclosed that one of the highlights was that the leadership of the House would meet with the President, Major General Muhammadu Buhari (retd.), to present the resolutions of the parliament on the crisis to him.

Gbajabiamila had summoned the stakeholders’ meeting to resolve the crisis that had led to the strike.

The Speaker had invited the Minister of Finance, Budget and National Planning, Zainab Ahmed; Minister of Labour, Employment and Productivity, Chris Ngige; Minister of Education, Adamu Adamu; the national leadership of ASUU and other critical stakeholders.

The leadership of the House and ASUU were in attendance, while the ministers of finance and labour were absent. The Minister of State for Education, Goodluck Opiah, and a representative of the labour ministry were also in attendance.

A former Governor of the Central Bank of Nigeria, Lamido Sanusi, has urged the Federal Government and ASUU to resolve the lingering crisis.

Sanusi made the call in an interview with the News Agency of Nigeria in New York on the sidelines of a three-day Transforming Education Summit.

“Both sides (ASUU and Federal Government) have a stake in sitting down and have a dialogue, making compromises, I believe it can be resolved in good faith,” he said.

Lecturers at the Imo State University, Owerri, on Tuesday, said they had not pulled out of the ongoing strike.

The chairman of ASUU in IMSU, Odinakachukwu Ejiogu, disclosed this in a telephone interview with one of our correspondents.

Ejiogu said, “We have not pulled out of the ASUU strike. We will continue to be on strike until the national body of ASUU says otherwise.”

Meanwhile, ASUU said the union wrote to the House of Representatives and Senate in September and October 2021 but got no fruitful intervention before proceeding on strike.

The Chairman of the University of Ibadan chapter of ASUU, Prof Ayoola Akinwole, said this in a statement on Tuesday.

The union accused the National Assembly also of reneging on its promise to the union before it suspended its strike in 2020.

The Executive Director, Nigeria Network of Non-Governmental Organisations, Oyebisi Oluseyi, has said that parents have a say in the ongoing strike, as they are critical stakeholders in the educational sector.

Oluseyi disclosed this on Tuesday at a press conference in Lagos.

Back to School Expo, Conferences & Awards