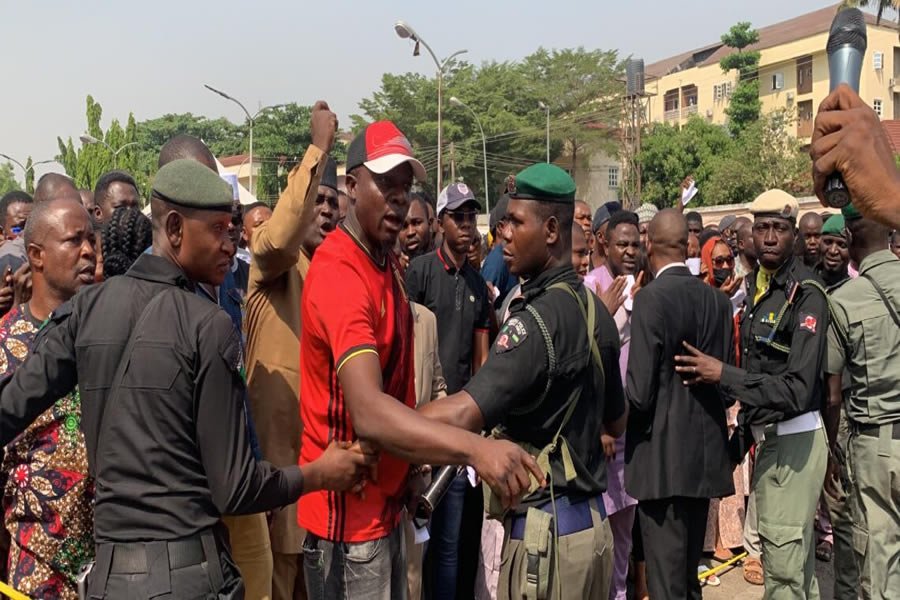 The autioning exercise conducted at EFCC’s Abuja office on Tuesday was disorderly and recorded a lot of disruptions.

The Economic and Financial Crimes Commission (EFCC), on Tuesday, in Abuja, auctioned 35 forfeited automobiles, including some luxurious and decrepit cars, petroleum tankers as well as space and coastal buses.

The exercise followed court orders obtained by EFCC permanently forfeiting the items to the federal government over the years.

A physical inspection of the vehicles was conducted on Monday, ahead of the auctioning exercise, which held at the EFCC zonal office at Wuse Zone 2, Abuja, on Tuesday

Our Correspondence observed that hundreds of interested participants, on Tuesday, gathered at the venue where banners with pictures of the cars were on display for potential bidders to choose from in three different auctioning lots.

Our reporter observed that despite the presence of EFCC officials and armed security personnel, the registration for bidding, which began at 9 am, was disorderly and recorded a lot of disruptions.

The auctioning exercise began at 1 a.m. and finished at 3 p.m.

The EFCC Deputy Director, Department of Proceeds of Crime Management, Umma Sulaiman, said the 35 cars for grabs were part of items forfeited by the EFCC over the years.

She said the proceeds from the exercise would be deposited in a special account of the federal government at the (CBN).

“This is the Abuja phase of the ongoing auctioning of finally forfeited of mainly vehicles. So at this point potential buyers are registering and after the registration process would start. It is an open action and would be a competitive bidding.

“We have 35 vehicles in Abuja for auction and there are three different lots. The auctioneers picked their lots by a ballot system and the value of each lot is the same.

“For lot one the consultants handling it is I-Naira, Uzbu A limited and Auction plus. They were engaged using the Public Procurement Act. And the proceeds would be moved to a treasury account at the CBN,” she said.

Many potential bidders interviewed by PREMIUM TIMES expressed dissatisfaction with the entire process, calling it a “sham,” while others praised the commission.

“This entire process is not favourable. Everywhere is rowdy. There are no provisions for canopies and chairs for the people that have come to bid,” said Adeniran Adetunji, an estate surveyor.

He added, “There is no public address system and you do not expect to get good result if things are done this way.

“There are not giving opportunities for people to properly make their bids. This entire process is a sham.”

He also queried the credibility of the auctioneers engaged by the EFCC to organise the exercise. He said that everything was improperly organised.

“In an auction, these people (auctioneers) need to understand that when you bidded for N3 million somebody else need to bid for N3.5 and others would bid N3.6 million and these is how goes. But what we experience is not the case. The bidding is ridiculous. The prices for bidding are same when you go buy at a car lot,” he said.

Maryam Gabriel left her home as early as 5 a.m in Gwagwalada, a suburb of Abuja, in the hopes of placing a competitive bid for her dream Toyota Camry car at the exercise.

However, to her dismay, Ms Gabriel’s hopes were dashed when she discovered that she was unable to make a bid. She described the procedure as chaotic and unorganised.

Additionally, the 40-year-old alleged that certain auctioneers were colluding with people by writing down the names of those who were not present at the registration in the presence of EFCC officials.

She, therefore, wondered whether the EFCC was truly fighting financial crimes by ensuring corruption is curtailed at all levels.

“I came from Gwagwalada and arrived here at past seven. The queue was long. At the beginning, the process was orderly, the female and male lines were separate But before you knew it, everything got mixed up.

“I registered at the second lot, and to my surprise I thought you will be able to bid for any choice of vehicles, but we were told you can only bid at the particular lot you registered at. I am not sure that was even properly informed to everyone. And the kind of car in my own lot are not too good. Not all.

“I observed that while many of us were struggling to queue and register, some were sitting at home as officials here had already written their names down and kept their bidding numbers.

“I cannot imagine this can be happening in the presence and on the premises of the EFCC. If you say they are fighting corruption, is it only for financial crimes or general means of corruption?” Ms Gabriel said.

Unlike Ms Gabriel and Mr Adetunji with unsavoury experience, another participant who identified himself as Alhaji Gubiu said he had a seamless experience in the bidding exercise.

He told PREMIUM TIMES that he was able to successfully bid a car for himself at N500,000 for a Toyota Carina 2. He also said he had visited the inspection site to see the quality of the vehicle which he feels satisfied with his purchase.

“For me I am happy with the entire process. It went fine and I got the car of my choice,” he said.

Nine auctioneers were assigned to the Lagos Zonal Command of the EFCC to dispose of the 435 cars at the designated Centre on 14 Cameron Road, Ikoyi, Lagos.

The cars, which their pictures were conspicuously displayed with allocated lot numbers for public inspection, were allocated to auctioneers based on assessed values and an open ballot system.

The display was to provide an opportunity for interested bidders to view and indicate interest in any car of their choice.

Fire breaks out at defence headquarters in Abuja