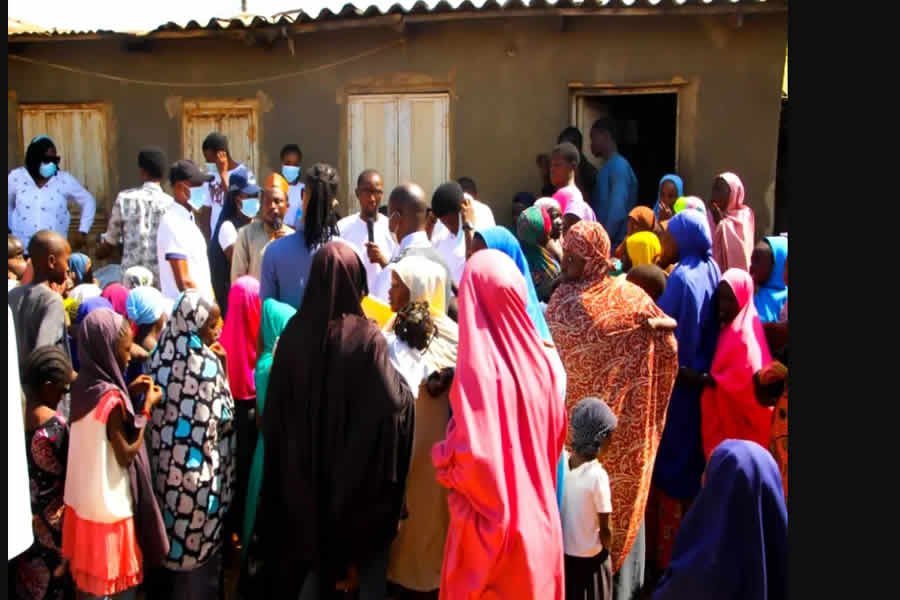 Led by one of its Executive Director, Samson Tega, and the director of legal and operations, Barrister Ovie Justice, NACAT, a pro-democracy Civil Society Organization duly registered under Part “C” of the Companies and Allied Matters Act, Cap C20, Laws of the federation of Nigeria 2004 to, amongst other things, work with stakeholders for purposes of contributing to the global war against corruption, financial crimes, terrorism and economic sabotage.

During the one-day sensitization exercise, the NGO distributed food items such as bags of rice, cartons of spaghetti, cartons of indomie, bags of salts, cartons of tin tomatoes, packets of maggi as well as cash to the villagers.

The NGO, which was received by the village head, Alhassan Muhammed and other community leaders, emphasized the need for the elderly people in the village to educate their children about the dangers of corruption, drugs, and human trafficking.

In his address to the villagers, NACAT Manager Stanley Ugagbe harped on how to identify human traffickers as well as drug tracking. He stated that the company’s goal is to combat corruption and human tracking in the country, and that it is ready to assist the community in combating corruption and tracking.

“We are a group of young people who came together to see how we can contribute to nation building. In our research, we discovered that drug dealing, arms trafficking and human trafficking are the largest crime industries in the world.

According to Stanley, drug trafficking, a global illicit trade involving the cultivation, manufacture, distribution and sale of substances which are subject to drug prohibition laws is another major vice that has eaten deep into the society. He stressed the need for the villagers to steer clear of the vice.

“If you are here and you are into drugs, or you have a brother, sister, mother, father, uncle, sibling, friend or you know anyone around you who is into drugs, tell them that there is an NGO in town whose mission is to weed the society of such people and we will not leave any stone unturned in doing so.”

Stanley continued that the NGO is not selective in its fight against corruption, human and drug trafficking. “Irrespective of your status or who is behind you, we will come after you once you’re found complicit in these vices.”

In his remarks, the village head Alhassan Muhammed expressed gratitude to the NGO for deeming it fit to visit the community with such a crucial message. He stated as a community, they do not tolerate ill vices and will always deter such anomalies in the society.

Muhammed lauded the NGO for providing the food items as well as the cash. He prayed that God would reward the group, urging them to continue to devote themselves to humanitarian works in the society, especially in remote villages such as theirs.

Since its inception, NACAT has taken some politicians and civil servants to court for misappropriation of public funds. The NGO has also assisted in the rescue of victims of human trafficking and has been consistent in providing humanitarian services to the less privileged persons in society.

Nigerians to save foreign exchange as Buhari commission hospital in Abuja