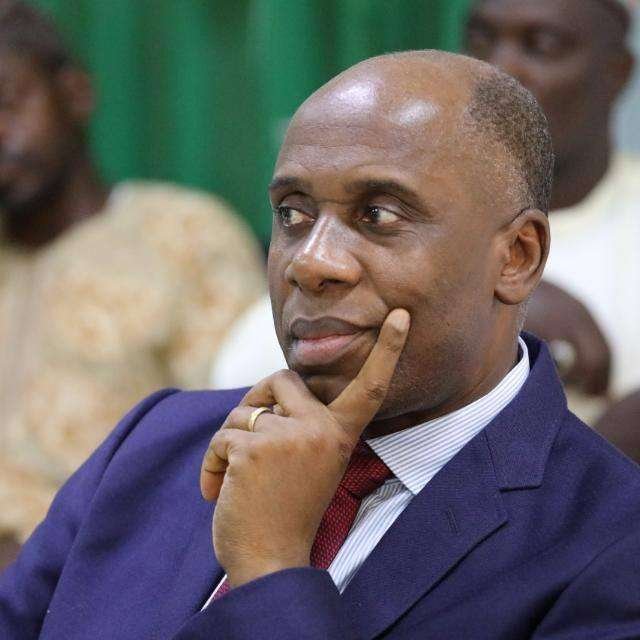 How Amaechi was insulted and told to ‘sit down’

Transport Minister Rotimi Amaechi was booed and asked to sit down by an angry Abuja audience.

Amaechi, a member of the audience, got up to speak. This was what got the crowd worked up apparently.

They didn’t want Amaechi speaking for Buhari. They wanted Buhari in here to speak for himself.

But Amaechi would not be stopped. Again, let’s lean on Daily Post’s account of events for a moment: “The Minister, who was not part of the debaters, took to the stage to mock the candidate of the Peoples’ Democratic Party, PDP, Atiku Abubakar over his plan to privatize the Nigerian National Petroleum Corporation, NNPC.

“He alleged that Atiku’s plan of privatizing the state-owned oil company was laced with corrupt intentions.

“Afterwards, he went further to attempt a reel out of President Buhari’s achievements in office but was met with the resistance of the audience.

“The audience booed him and shouted ‘sit down!’ ‘sit down!’ for as long as Amaechi tried to speak in praise of the government.

“Overwhelmed by the apparent anti-Buhari chants, the Minister caved into the pressure and took his seat”.

There’s actually another presidential debate slated for the dates in this link. Hopefully, the president finds the time to attend this one.

On November 15, 2018, Amaechi said he stopped Buhari from appearing at the 2015 election debate because the exercise was unnecessary. culled from pulse.ng

Largest church auditorium in the world dedicated in Abuja