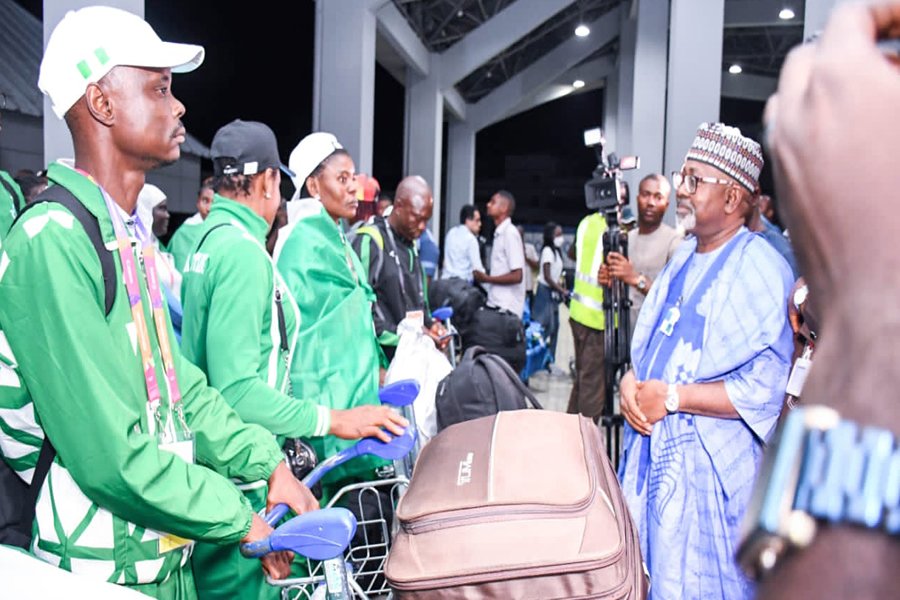 The first batch of Team Nigeria’s contingent to the Birmingham 2022 Commonwealth Games on arrival at the Nnamdi Azikiwe Airport, Abuja…yesterday.

• Amusan, Brume jet out to the U.S., AFN officials, remaining athletes return today
• How Ofili wanted to pull out of C’wealth Games

The first batch of Team Nigeria athletes to the just concluded Commonwealth Games in Birmingham was yesterday, given a heroic welcome by the Federal Government on their return after a successful outing.

Receiving the athletes and their officials at the Nnamdi Azikiwe International Airport, Abuja, yesterday, Minister of Youth and Sports Development, Sunday Dare, applauded their excellent performance, which yielded 35 medals, lifting the country to the seventh position on the Games’ honours roll.

Represented by the Permanent Secretary, Federal Ministry of Youth and Sports Development, Alhaji Ismaila Abubakar, the minister expressed joy on behalf of the country over their outstanding achievement, which was the first in the history of the nation.

“We are proud of you. We are also ready to give you all the support needed to make you soar higher and higher,” he said.

The Permanent Secretary, who was represented by the Director, National Sports Festival & Para Sports (NSF & PS) Department of the Ministry, Mr. Peter Nelson, reiterated his commitment to ensuring the realisation of the present administration’s policy thrust in the area of youth and sports development.

Speaking on behalf of the athletes, the two-time Commonwealth gold medallist and Tokyo 2020 silver medalist, Blessing Oborodudu, thanked President Muhammadu Buhari for his support to the Team, describing him as the father of sports in contemporary Nigeria.

She also appreciated Dare, Abubakar and other top management staff of the Ministry, the Nigeria Olympic Committee (NOC), as well as their coaches, for giving them much support and the opportunity to do the nation proud at the Commonwealth Games.

World record holder and Commonwealth Games champion, Tobi Amusan, and long jump golden girl, Ese Brume, were not part of the team in Abuja, as they returned to their base in the United States.

While Brume, who set Commonwealth Games record twice on her way to winning the long jump gold medal on Sunday, left Birmingham for the U.S. on Tuesday morning, Amusan and a few others jetted out yesterday.

The duo of Amusan and Brume were said to have headed to the U.S. to prepare for the next stage of the prestigious Diamond League.

The Guardian learnt yesterday that the last batch of Nigerian contingent to Birmingham 2022 Commonwealth Games, including the Technical Director of the Athletics Federation of Nigerian (AFN), Samuel Onikeku, and members of the gold-winning women’s 4×100 metres relay team, will hit Abuja today.

MEANWHILE, an official of Team Nigeria has revealed how golden girl, sprinter Favour Ofili, almost pulled out of the Commonwealth Games in Birmingham.

According to the official, Ofili, who won silver in the 200m before helping the women’s 4×100 metres relay team to win gold on the last day of the athletics event, considered the option of withdrawing from the competition following ‘some frustrating issues,’ including being quarantined for COVID 19 on arrival in Birmingham.

“It took a high level of counselling from some of our officials before Ofili agreed to participate in the Games,” the official stated.

The Guardian recalls that Ofili could not travel from the U.S. to Nigeria to attend the National Trials at the Samuel Ogbemudia Stadium, Benin City, where athletes were selected for both the World Championships in Oregon and the Commonwealth Games due to alleged health-related issues. The Trials in Benin City took place in June.