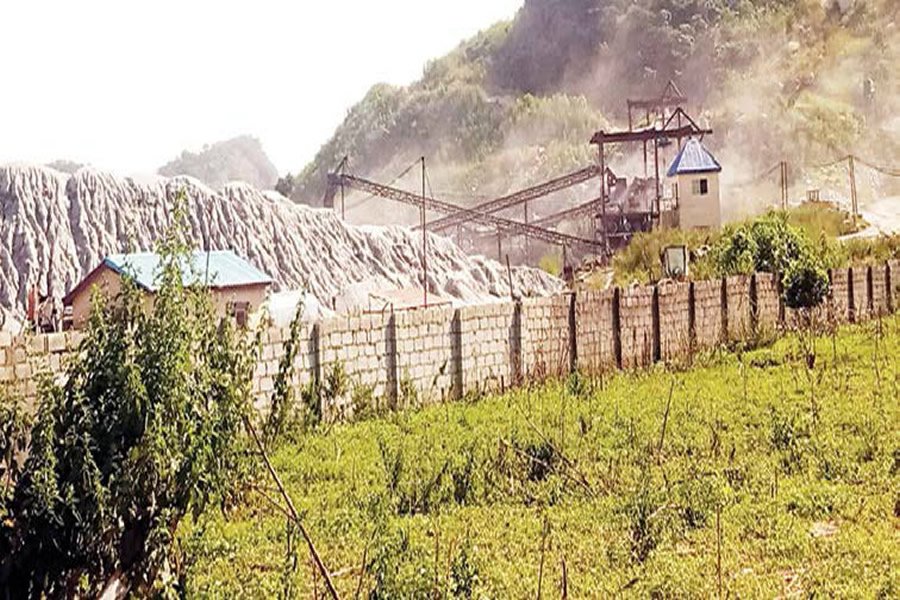 Abuja communities where residents live in fear of miners

Chididum, a seven-year-old boy, is afraid. He is seated with his elder brother, Emmanuel, outside his father’s residence without any impending attack from kidnappers or bandits, but he is scared. Trying to explain the cause of his fears, the young boy pointed at a heavy-duty machine dissecting rocks from 200 metres away. To him, the stones are another form of insurgency.

“The stones are too big, and it affects our house. If it falls on your head, you will die,” Chididum said.

As our correspondent was pondering his utterance, he continued, “The vibration from there is very bad. Sometimes, we think it is a bomb, and it has started affecting our houses too. They just break the rocks anyhow.”

How We Juggled Schooling With Our Royal Duties -Ondo Female Regents

For decades, the Chachi community and Zuma Rock Estate have enjoyed God’s gift of nature, Zuma Rock. While the estate is sparsely populated with little or no economic activity going on, Chachi is an agrarian community.

But the livelihood and lives of the residents are being threatened by the presence of Huatai Construction Ltd., Lian Hua Quarry, and Construction Product Nigeria Ltd., which are owned by foreigners who arrived in the community about two years ago.

The quarry is close to the UNESCO-certified Zuma Rock, which contains a large natural “monolith,” or “inselberg,” an igneous intrusion composed of gabbro and granodiorite, located in Niger State.

Zuma Rock stands tall and majestic, bequeathing the landscape the gift of its presence. Regal in its appearance, the other mountains in and around Abuja and Niger State stay a respectable distance from it, paying a kind of obeisance to its royal presence.

The rock is located immediately west of Abuja, the nation’s capital, along the highway to Kaduna off Madala, a dusty town referred to as the “Gateway to Abuja from Suleja.”

It rises approximately 300 metres (980 feet) above its surroundings. It is said to be taller than two national monuments—Aso Rock and Olumo Rock—combined.

But for the residents of Chachi community and Zuma Rock Estate, the hitherto idyllic setting of Zuma Rock has literally become a valley of fear due to the threat to life posed by the mining activities in the area.

Our correspondent was denied access to the mining site, but with the use of Google Earth, the large-scale mining operation going on could be deduced.

Halimat and Umar, who are siblings, may be considered lucky. Their saving grace on that fateful day was the extra lesson they had with their teacher after school hours. Due to the heavy vibration from the quarry, the walls of their home caved in after a series of explosions earlier this year, but luckily, they were not back from school when the incident occurred.

“Our house collapsed partly because of explosions from the quarry. Immediately after the blast that day, the back of our house collapsed. Thank God, my mother was at home; she noticed that the room was shaking with small stones falling from the roof. She was able to pack some of our belongings. “The walls collapsed before she could call our neighbours for help,” Umar recalled.

Halimat explained that no form of compensation was offered by the companies to her parents despite several appeals by the community leaders.

She said, “Yes, our house collapsed early this year because of an explosion at the mining site. The wall separating our three rooms collapsed. When it happened, an old man tried to help us get justice, but he couldn’t do much, so we didn’t have any option but to rebuild it ourselves; we didn’t even plaster it, and that is how the matter died down.”

When our correspondent visited the rebuilt house, a visible crack was noticed in the renovated section.

For Christian, who looks to be in his early teens, nothing seems to bother him about the rippling vibrations and ear-shattering sound from the rock blasting.

“No, it doesn’t affect me,” he stated when our correspondent questioned him. He, however, expressed fear over the durability of the houses in the area.

“Our windows shake seriously when there is an explosion. I am not okay with it because it can damage my ears, but there is nothing I can do,” he stated.

The perturbed expressions of the residents of Chachi community and Zuma Rock Estate revealed that they have a lot on their minds; a burden they wish could be miraculously resolved.

Maryam explained that it was a struggle to keep the household items safe when an explosion goes off. She narrated that her radio and television set had been damaged by the heavy vibration from the quarry.

Speaking in broken English, she stated, “I don’t forget the time wey (the company) them come but e never reach two years. We dey this area before them come. The noise and vibration dey affect us well well. Dem fit blast rock two times a day. We are already getting used to it.”

She added that the blast goes off twice a day sometimes and up to four or five times a week.

Another resident, a middle-aged man who declined to disclose his identity, confirmed the ugly situation, saying the evidence could be seen in the cracked walls.

A man whose wife is pregnant said no form of compensation had been paid to them, noting that the community lacked electricity and other amenities despite its proximity to the nation’s capital.

“Hmmm, e dey disturb well well. If you dey inside the room, you go see as the house dey shake (demonstrating with his hands how it happens). I started living in this area four years ago. E never tey wey dem come, it’s up to two years,” he disclosed.

He further stated that his wife and children are used to the explosion but insisted that a change must happen soon.

Narrating his experience, Tosin, a student who is still at home due to the Academic Staff Union of Universities strike, stated that residents live in constant fear as they are unable to distinguish between a blast from the quarry and bandit attacks.

He said, “This area is susceptible to attacks, and the moment an explosion at the mining site goes off, we are afraid. I have witnessed it several times, and in a week, it happens four to five times a week. The stones don’t get here; we only hear the sound and feel the vibration evident with the shaking of windows and walls.

“About a month ago, bandits attacked a military checkpoint close to this place. Due to the attack, our fears are heightened whenever there is an explosion, as we are not certain if it is a bandit attack or not. We are actually scared.”

The community leader, Jonathan Yakubu, was sitting under a mango tree, discussing with friends, when our correspondent engaged with him.

Yakubu asserted that the cracks on his walls were evidence of the devastation wrought on the community by the quarry blasts.

He also stated that residents were moving out of the place due to frequent explosions.

How to build a Unicorn in Nigeria – Iyinoluwa Aboyeji.

Interesting reasons you should visit the Millennium Park, Abuja

As TCN plans to raise Abuja transmission network by 624MW