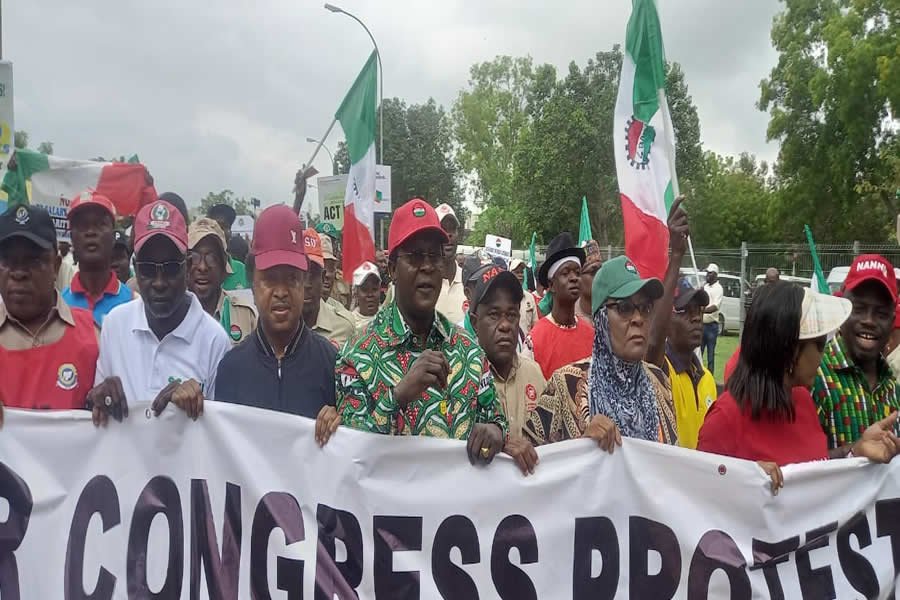 The striking unions have consistently accused the Nigerian government of unfulfilled pledges, saying they could no longer bear the brunt of the neglect the nation’s education sector continues to suffer.

The President of the Nigeria Labour Congress, Ayuba Wabba; former Senator and activist, Shehu Sani, and the Country Director of Actionaid Nigeria, Ene Obi, are leading hundreds of protesters in the Federal Capital Territory (FCT), Abuja, against the continued shutdown of Nigerian public universities.

The protesters, who had converged on the Unity Fountain, a popular protest ground in the capital city, were on their way to the National Assembly, chanting solidarity songs and carrying banners and placards bearing various inscriptions stating their demands.

It is the second day of the two-day nationwide protest declared by the NLC, the umbrella body of workers in Nigeria.

Various state chapters of the union had mobilised their members, parents and allies on Tuesday to kick off the two-day protest, even as they presented a list of demands to the state governors for onward delivery to President Muhammadu Buhari.

Leading the protest on Wednesday, Mr Wabba urged participants not to relent until the goal of reclaiming the lost glory in Nigeria’s education, economic, health and other sectors are reclaimed.

In response, the crowd chorused; “We would not be tired.”

“Save Teacher Education, Address Issues Now;” “We are Tired of Unfulfilled Promises,” among others, are some of the inscriptions on their banners.

Also conspicuous at the protest ground are members of the Colleges of Education Academic Staff Union (COEASU), who were also armed with placards and banners.

The common demands by all the striking unions include the rejection of the Integrated Personnel Payroll Information System (IPPIS) as a payment platform for the workers.

They are also demanding better welfare for their members and improved funding for the university system.

The striking unions have consistently accused the Nigerian government of unfulfilled pledges, saying they could no longer bear the brunt of the neglect the nation’s education sector continues to suffer.

ASUU President, Emmanuel Osodeke, said by the National Universities Commission (NUC’s) regulations, the ratio for lecturer to students is 1:9 in medical and sciences and 1:15 in the humanities and social sciences, but that the reality is unimaginable.

He said; “In the university today, there are 1 teacher to over 1,000 students. That’s what brought the earned academic allowance that they did not pay.

“So we need to let them know that they don’t have dominance over us. Universities are universal. Our universities used to have foreign students. You are a child of a governor, you sit and learn with the child of a driver. Eat in the cafeteria together. Stay in the same hostel. Today, it is not like that”.

He recalled how the government had agreed to pay a revitalisation fund of N200 billion yearly, but that it never did.

The ASUU President accused a former Pro-Chancellor of the University of Lagos (UNILAG), Wale Babalakin, of attempting to commercialise education in Nigeria.

Mr Babalakin, who led the negotiation team between the government and ASUU from 2017 to 2020, when he angrily resigned, was accused of highhandedness, but Mr Babalakin has consistently denied this.

Mr Osodeke added that his union’s protest against IPPIS has been proved right by the fraud allegations against the disgraced Accountant-General of the Federation, Ahmed Idris.

“We have been vindicated by what happened to the accountant general,” said Mr Osodeke.