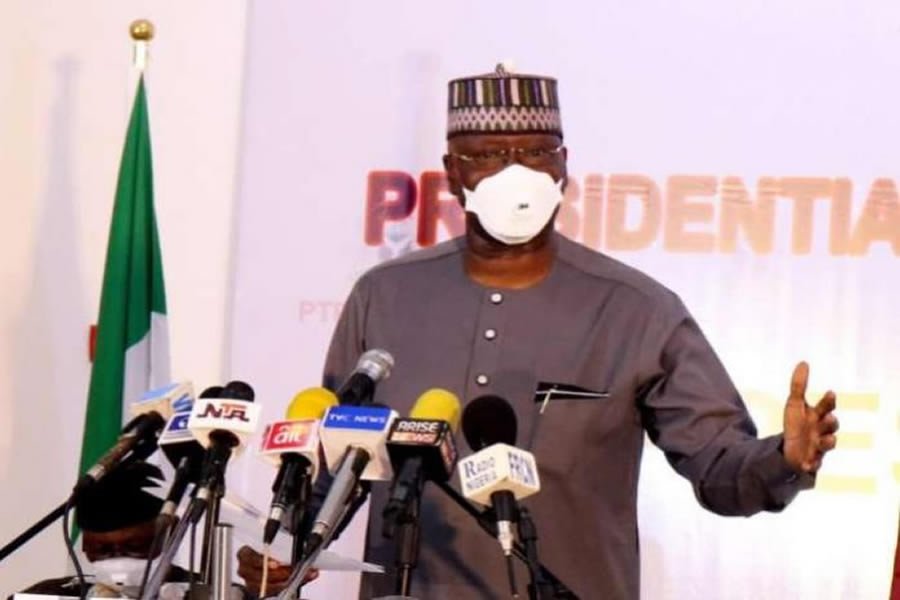 The Federal Government has vowed to secure the release of two pilots of Caverton Helicopters arrested in Port Harcourt Rivers State and remanded in a state facility by a Magistrate Court.

This was as it emerged that the 14-day lockdown of Abuja, Lagos and Ogun states could be extended for some few days to ramp up efforts at containing the spread of the Novel Coronavirus.

According to the government, with what is happening in other countries, one can easily deduce what the decision of the president will be on the lockdown.

South Africa and some hard-hit countries had recently announced an extension of their lockdowns.

Chairman of the Task-force and Secretary to the Government of the Federation, SGF, Mr Boss Mustapha, said the team had briefed President Muhammadu Buhari on the assessment of the nation’s response so far and that as more evaluation of the process continues, the President would be given more briefings to inform his decision on whether to extend the lockdown or not.

He also reiterated his call on state governments not to relax the containment protocols earlier put in place to control the spread of Covid-19.

Mustapha dismissed reports suggesting that he was not aware of the poor state of Nigeria’s health infrastructure, saying he was quoted our of context.

Giving an inkling as to the likelihood of the extension, the SGF said with happening on the global scene, one could deduce what the president’s decision would be.

He said; “The Presidential Task-force, a small committee of us, this afternoon had the privilege of further briefing Mr President on the assessment of our response to Covid-19 and at the appropriate moment we will continue to adequately inform Nigerians of government decision.

“As reported to you earlier in the week, our evaluation of the impact of the restriction order continues. The Presidential Task Force on COVID-19 will appropriately brief Mr. President shortly and Nigerians will be adequately informed of the decision of Government.

“In recognition of our shared responsibility as citizens, the Presidential Task Force on COVID-19 renews its appeal to Nigerians to continue to comply fully and willingly with all the advisories and orders given in this regard. we underscore the deadliness of the coronavirus with all seriousness.

“The decision either to extend the lockdown or not is exclusively the responsibility or the decision of the President. Ours is to provide him with a background information that will inform that decision. Though, I cannot speculate on that now, but looking at what is happening in other climes, you will be able to deduce what might likely happen but I am not in a position to speculate on that.

Aviation minister, Hadi Sirika, on his part vowed that the Federal government will secure the release of the two pilots remanded in a facility in Port Harcourt.

He said; “The pilots were carrying out national assignment as stated in the speech and address by the SGF who is the Chairman of the Taskforce and the address of the President, oil and gas sector is exempted from the lockdown in national interest. These Caverton Pilots were flying into a military base, national assignment.

Of course, I may not be ‘learned’ but I am ‘lettered’ and I understand, if any, in this case there is none, a conflict between a state law and a Federal law. But I will not argue law on this platform. It is unnecessary. So, whether His Excellency, the Governor of Rivers state ought to know if the exempted Caverton flight would be landing in a military base in Port Harcourt belonging to the Airforce, he does not need to know.

“The pilots will soon be released. They will be secured and there will not be any conviction hanging on their necks. And arising from the Constitutional provision and the powers of Mr President, and the seriousness of this Task-force and the danger of Covid-19, and the way we operate, civil aviation including military aviation, that is why I said the Air force officer acted ignorantly when a Chopper landed on his property to have called the governor and also the Federal police who made the arrest within the premises of the military acted ignorantly too, same with those who prosecuted them.

And I said they exhibited incompetence. This matter should not be over flogged. The Federal Government is a very serious matter. It is therefore the 200 million people of Nigeria”, he stated.

On his part, Director General of the Nigerian Centre for Disease Control NCDC, Dr Chikwe Iheakwazu dismissed reports that the Centre had spent N1 billion on sending text messages go Nigerians, saying all the messages being sent to people were sponsored by the telecommunication companies and that the NCDC never spent a dime in that regard.

Speaker Gbajabiamila: We‘ll not tolerate maltreatment of Nigerians in China